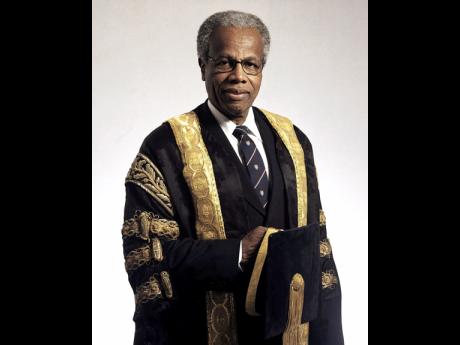 Sir George Alleyne has, for the past 13 years, diligently stood for hours greeting, with hearty smiles and mini conversations, the more than 74,000 graduates of the University of the West Indies (UWI) who, decked in caps, hoods and gowns, crossed platforms to collect their degrees.

On Saturday evening at the Mona campus, where he obtained his medical degree in 1957, the highly regarded Barbadian professor of medicine shook the last pair of such hands as, at the end of this academic year, he will demit office as chancellor and ceremonial head of the 68-year-old regional institution.

"In these past 13 years, our chancellor has conducted these ceremonies, and, indeed, all aspects of the office of chancellor with precision and panache and with dignity and distinction," said Sir Hilary Beckles, the vice-chancellor and administrative head of the UWI.

Responding, Alleyne, 84, known for his wit and charm, credited his Jamaican wife, Dr Sylvan Alleyne, the university and a host of other people for their support over the years.

"(Becoming chancellor) is the highest honour that can be bestowed on an alumnus, and I'm grateful for the opportunity to have served the university in this capacity over the last 13 years," he said.

In his speech, he emphasised why he made greeting each graduate a major part of his job, which had come to include appearing at 13 graduation ceremonies each year spread across the Open Campus, Cave Hill in Barbados, St Augustine in Trinidad and Tobago, and Mona in Jamaica

"To be able to shake hands with graduates is an opportunity to bond across the years and, in a sense, when myself and the gradate are shaking hands, we are almost in a tiny cocoon of history. Cocoon - the symbolism of which goes back to the Middle Ages when shaking of hands meant the idea of trust and confidence in one another, and that is why I shake the graduates' hands," Sir George said.

"Of course, I'll miss it," he said of his departure from the top post.

Along with his illustrious academic career, Alleyne also served as director of the Pan American Health Organisation and as the UN Secretary General's special envoy for HIV/AIDS in the Caribbean.

Sir George wished the university well and pointed to work he said still needs to be done, such as combating the denigration of women in popular music.