Crisis in the Rio Grande valley 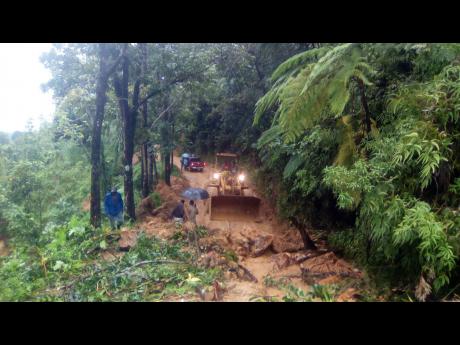 Unless Government directs resources to Bellevue in the Rio Grande Valley of Portland, where thousands of residents, including students, have been marooned due to multiple land slippages, conditions could worsen in a community where there is little water, little food, and no electricity.

The worsening situation is being felt by the most vulnerable, including the elderly and students, who are unable to traverse the devastated terrain, which is made worse by mud, water, and the stench from animals.

"We have no water, and food is running low," commented Herman Reid, principal of Bellevue Primary.

"Unless we get some heavy-duty equipment in the area, this community will remain blocked. I am very distraught and concerned about these students, who could be out of school for another three weeks. I am also worried that anyone falling ill at this time will not be able to get medical attention. And with the Zika virus still in the air, there is great concern now as water outlets are everywhere. I cannot ask my female teachers to traverse four kilometres of mud and slippery conditions to get to school, but I will be present as students have to prepare for the Grade Six Achievement Test," Reid added.

According to the principal, grade five and grade six students have been asked to see how best they can negotiate the slippery and adverse road conditions, especially those living in proximity to the school.

Six days of torrential rainfall recently pounded the Rio Grande Valley, destroying houses, livestock, vegetation, and leaving several other communities, including Mill Bank, Comfort Castle, Ginger House, and Cornwall Barracks blocked. However, a team from the National Works Agency has since managed to clear a section of Mill Bank, Comfort Castle, and Ginger House, which are now able to accommodate single-lane traffic.

But while those adjoining communities have been partially cleared, Bellevue remains a serious challenge, especially given the fact that dozens of utility poles have been dislodged and up to yesterday, were still lying on the ground.

Shennel Sterling, a fourth-form student at Titchfield High School, told The Gleaner yesterday that since the devastation caused by the recent heavy rains, she has to walk more than four miles to get a vehicle, which will transport her into Port Antonio, which is approximately 18 miles from Bellevue.

"My dad accompanies me to the point where I get a taxi. I have to travel with my uniform in a bag and also a change of clothing. I have to claw my way through the mud and slippery conditions. There is no electricity and, therefore, I have to go into Port Antonio, where I get my uniform ironed for school. This is like a nightmare for me and others," she added.

In the meantime, residents said there was no sign of their political representatives, who have visited other flood-ravaged communities but who are unable to access the rugged terrain, which has been made worse by at least 18 massive landslides, to get into Bellevue.

And with the crisis situation escalating, there is the urgent cry from residents for the powers that be to drop off food and water by helicopter as shops are now running low on food.