Independent candidates have strong showing in the West 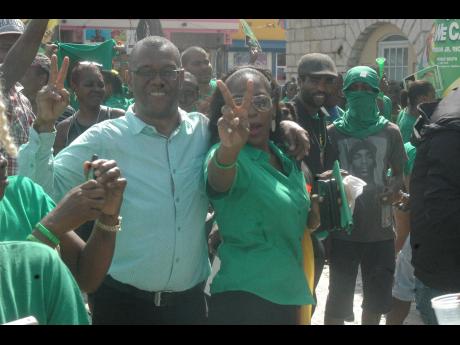 Adrian Frater
Charles Sinclair, councillor for the Flanker Division, and his wife Glennette caught in a celebratory mood after his nomination yesterday.

The battle for control of western Jamaica's five municipal corporations (formerly parish councils) got into full motion yesterday with both the ruling Jamaica Labour Party (JLP) and the Opposition People's National Party (PNP) nominating their full slate of candidates in the 62 divisions across the region.

While the process went fairly smoothly in Trelawny, St James, Westmoreland and St Elizabeth, the situation in Hanover was rather unsual as some eight independent candidates, mostly defectors from the PNP, were nominated amid much fanfare.

"The independent candidates, who are all from western Hanover, are the ones generating most of the excitement," said Craig Oates, eastern Hanover representative on the PNP's National Executive Council. "It is almost an open rebellion against Ian Hayles, the member of parliament and chairman of the PNP's Region Six. The leadership of the PNP needs to address the discontent or dark days are ahead for the party in this constituency."

Of the total number of candidates vying for seats in the Hanover, eight are women.

In St James, the epicentre of the region's political landscape, JLP and PNP candidates looked well organised on the ground. While the PNP, which is defending a 13-4 majority appeared cautiously optimistic, the JLP was bubbling with confidence that they would gain power.

"We are very confident. The country is in a positive mood at this time, the economy is growing and there is the sense of direction in the country," said Dr Horace Chang, the JLP's general secretary and member of parliament for North West St James. "We believe the enthusiasm that is out there will carry us through this election."

Chang said he expected four of the five municipal corporations - Trelawny, St James, Hanover and St Elizabeth - will fall into the hands of the JLP.

"While we did very well in the general election earlier this year, we are not taking anything for granted," said Chang.

Ras Astor Black of the Jamaica Alliance Movement, who has become a fixture on the local political landscape, will again be on the ballot. This time he will be contesting the Welcome Hall division in southern St James.