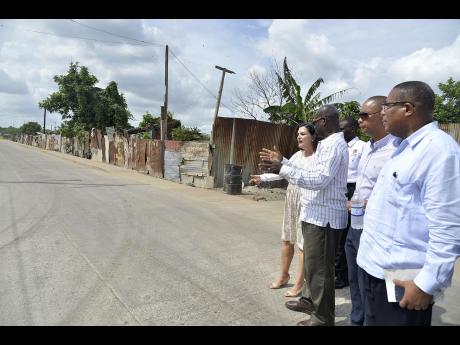 Chairman of the National Solid Waste Management Authority (NSWMA) Dennis Chung has indicated that the opening of two access roads leading to the Riverton landfill in St Andrew will make entering the disposal site more efficient as well as set the tone for the privatisation of the country's solid waste management system.

The opening ceremony was held at the Power of Hope Deliverance Church in Riverton Meadows.

The quality of life for residents is expected to improve.

"If you've ever come down here before to the dump, you'd understand the access problem to get down here. The dirt road was uneven, and it used to create a lot of damage. Now, we can be a lot more efficient in terms of accessing the dump. It's a part of the upgrade of the dump. When I used to traverse this road, it used to take me a while just to come from the entrance to (the dump) and I am sure the time (to access the dump), has been cut by more than half," Chung told The Gleaner.

Residents had also, in the past, complained about the serious dust problem they had been experiencing as a result of the condition of the roads.

Chung highlighted that the Lyttleton Shirley-led enterprise team, set up by Prime Minister Andrew Holness on October 31, was responsible for reviewing all proposals made for the dump and for selecting the most suitable option.

Holness had initially cited plans for a waste-to-energy operation there, however, Chung said that those plans were not definite.

"An enterprise team has been set up to look at the best use because we don't know if energy is the best use. It might be recycling. What we should do is transform this landfill here to a First World place. I've seen proposals where they have housing projects, and more important, we can get people who are working on the dump into formal employment in hygienic situations. I estimate that it will take us two years to get to that point, but I think it's going to be a big lift for the community," Chung said.

"We are looking for anybody who wants to bid. What we are going to do is to put a request for proposals out, and then people will bid to actually get the contract to do it and take over the dump."

The planning of the project started in September 2015, but the physical aspect of it began on January 11, 2016, with US$1.8 million funding from the government of Mexico. United Nations Office for Project Services (UNOPS) managed the project.

"UNOPS has the mandate to support governments through project management, infrastructure, and procurement services with the focus on sustainability and development of national capacities. This project to improve access to the landfill of about 1.6km of concrete road. It aims to improve the environmental conditions of Riverton," UN Resident Coordinator and UNDP Resident Representative, Bruno Pouezat said.