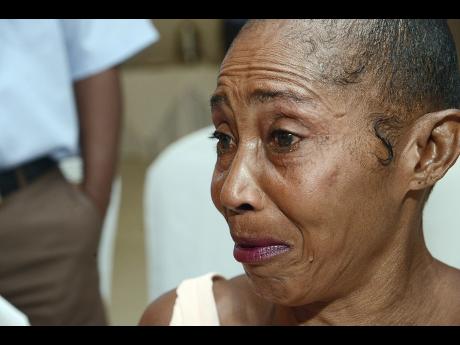 Rudolph Brown
Jewel Black, mother of Kirk Jones, who was killed by the security forces, breaks down in tears during yesterday's release of an Amnesty International report into the impact of police killings on families of victims, which took place at the Terra Nova All Suite Hotel in St Andrew.

Justice Minister Delroy Chuck has acknowledged findings by Amnesty International that gaps within the judicial system are contributing to long delays faced by family members pursuing justice for relatives who have becoming victims of police killings.

In a report released yesterday, the human-rights watchdog also highlighted a culture of fear it claims is being promoted by members of the police force in dealing with the victims' relatives.

The report titled 'Waiting in Vain: Unlawful Police Killings and Relatives' Long Struggle for Justice' was shared during a press conference held yesterday at the Terra Nova All Suite Hotel in St Andrew.

According to Amnesty, the report explores illegal tactics used by police across Jamaica to ensure relatives of victims of unlawful killings by the police do not pursue justice, truth, and reparation for their loved ones.

The tactics include systematic intimidation, harassment and threats against relatives at home, work, hospitals, and even during funerals.

The international watchdog said that while they welcomed news that there has been a reduction in police killings between 2014 and 2015, it has found no evidence of improved internal accountability within the force with regard to how officers operate.

Amnesty attributed the reduction to improved investigation and prosecution by the Independent Commission of Investigations (INDECOM), but said there was an urgent need to fix the way justice is delivered.

Chuck said there was no denying that significant improvement is needed to deal with incidents of crime.

He also sought to inform the public that there are avenues available through which families can claim compensation.

"We admit that there are significant delays in the delivery of justice, especially in the courts, and it is a matter which we are working on to see how we can reduce the excessive delays in the system," he said.

"To the extent that they have good claims for compensation, then it should be a matter that should be dealt with expeditiously too. Once they bring a claim against the attorney general, then we hope that these matters can be dealt with in a manner so that compensation, if recommended or if there is success, can be done in a quick manner," he said.

Louise Tillotson, Caribbean researcher for Amnesty International, told The Gleaner that interviews were conducted with more than 50 relatives (39 women and 14 men) of 28 people believed to have been unlawfully killed by police between 2003 and 2014.

She said most had experienced intense and pervasive harassment and intimidation by police in their pursuit of justice, causing them further mental suffering.

"What was overwhelming for me is that there is a lot of fear within communities. Despite a huge amount of pain, despite lengthy interviews, they were often reluctant for us to print their names or even the name of the person who is deceased. They have already experienced harassment, intimidation, and reprisals in their communities and so there is this big culture of silence and that of course drives impunity," she told The Gleaner.

Tillotson also bemoaned the fact that a huge burden is left on women and children especially, as more men continue to be the victims of criminal incidents when compared with females.

"What we found is that, oftentimes, it's the women in the family who are left to pursue justice. As we know, many of the fatal shootings, with the exception of a few, are of men, and this has long-term economic implications and other things for the household," she said.

Various family members were represented for the release of the Amnesty report, including the mother of Mario Deane, Mercia Frazer; Shackeilia Jackson, who is the sister of Robert 'Nakia' Jackson, who was allegedly killed by police at his cook shop on Orange Street in Kingston; and Jewel Blake, mother of Kirk Jones, who was killed in 2011.