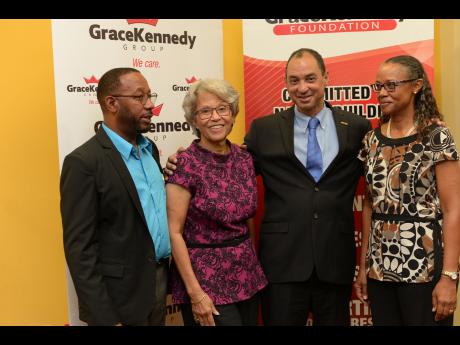 The GraceKennedy Foun-dation has renewed funding for the Carlton S. Alexander Chair in Management Studies and the James Moss-Solomon Senior Chair in Environmental Management at the University of the West Indies (UWI).

The Chairs are respectively held by Professor Ian Boxill, who has been in the post since 2010, and Professor Mona Webber, who was appointed on October 1 this year.

During a forum held on November 22 at the Regional Headquarters at the UWI, both professors spoke about their research, community work, and their relevance to current problems being faced by the country.

Among Boxill's research and contributions over the past year is a programme with the Sandals Group and Island Tours to identify ways of leveraging Jamaica's attractions, improving the tourist experience, expanding linkages, and earning more revenue for the country. He has also conducted a needs assessment with the Jamaica Manufacturing Association to identify the areas where greater support is needed by the sector to increase its effectiveness. Manufacturing contributed 8.6 per cent to GDP in 2015.

Webber's account of her research opened eyes and minds as she shared about the life-giving and, possibly, life-saving work her team is conducting under the sea.

She spoke about the impact of pollution on marine health and announced that she would be delving further into examining content found in the stomachs of fish found in Jamaica's waters. Already discovered is that some fish are consuming toxic micro plastics. Her research will have far-reaching implication for the livelihood of fishermen and the health of consumers of seafood.

Each Chair is funded by the GraceKennedy Foundation at a value of $5.5. million per annum.

"The UWI must be known as a centre for solutions and a leader in promoting innovation and innovative thinking among its students - the future leaders of Jamaica. Education, after all, is the ultimate problem solver ... I again restate GraceKennedy's commitment to UWI as we see it as one of our ways of answering the future's call," Wehby said.

Professor Archie McDonald, principal of the UWI's Mona campus, described the partnership between the GraceKennedy Foundation and the UWI as "the quintessential merger of big business and education".