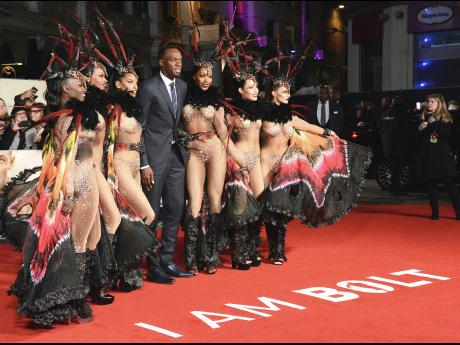 Ricardo Makyn
Usain Bolt poses with dancers at the premiere of 'I Am Bolt' at the Odeon Cinema, Leicester Square, London. 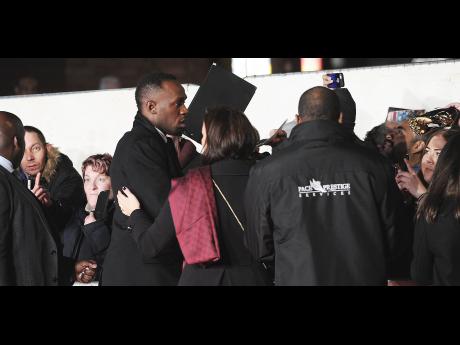 Ricardo Makyn
Usain Bolt signs autographs for fan’s at the premiere of ‘I Am Bolt’ at the Odeon Cinema in Leicester Square, London.
1
2

Quite accustomed to motoring along throughout his career, track and field's golden boy Usain Bolt took his time as he made his way down the red carpet at last night's London premiere of his biopic, I am Bolt, and he wasn't alone.

Bolt's larger-than-life figure brought out some of the biggest names in British sports, television and music as the isle's A-listers shone bright under the lights during a nearly two-hour, pre-movie set, which took place in freezing conditions at the West End's Odeon Leicester Square cinema.

"I am extremely proud of him. He has given the country so much of a lift in terms of unity, positives and gives a lot for the kids to look up to. To me, he is a national hero. People are sad that he might be moving out of track and field soon, but whatever he puts his mind to, he will do well," Sean Paul said.

Becker hailed Bolt as legendary and noted that the sport will never be the same without his presence.

"He is an icon. People use that word so often sometimes, but in his (Bolt's) case, he absolutely embodies the meaning of the word, and not just where track and field or the Olympics is concerned, he goes beyond all that," said Becker, a six-time majors champion.

.@usainbolt #IAmBolt documentary clip: "I get nervous before my first race, ... . Every year I worry, am I still the fastest ..." pic.twitter.com/oJI4zh5zAe

Clad in a navy blue Brioni suit, blue tie and matching Gucci shoes, Bolt was the first on the red carpet where he was joined by carnival costume-clad dancing girls with popular dancehall artistes Alkaline, Popcaan and Vybz Kartel, along with reggae crooner Chronixx, dominating the disc jock's selections.

'I AM BOLT' PREMIERE PHOTOS HERE

I am Bolt, which was co-directed by brothers Gabe and Benjamin Turner, takes viewers behind the scenes on Bolt's journey to nine Olympic gold medals and is now available on digital download, Blu-ray and DVD.