Green light - JLP gets thumbs up with local gov't victories 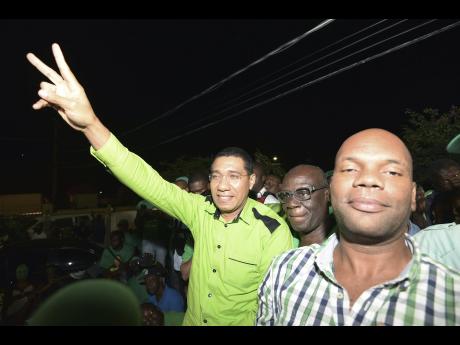 With the February 25 general election win providing well-needed momentum for its candidates, the governing Jamaica Labour Party (JLP) yesterday overturned the People's National Party's (PNP) stranglehold on municipal corporations and took control of the majority of the local authorities islandwide.

Prime Minister Andrew Holness, in his victory speech to a large crowd at the JLP's Belmont Road, St Andrew, headquarters, said he was proud to be leading the party at this time in the history of Jamaica's development.

Holness called the victory a referendum on the Government's performance over the last nine months. This followed the party's narrow win by one seat in the February 2016 general election.

"Jamaica is saying you have performed, but again, we are not going to take it for granted. We are going to work even harder because the situation at the central government is still tight and there is no room for error or complacency.

PNP President Portia Simpson Miller did not show up to address supporters who gathered at PNP headquarters last night.

The job was left to Paul Burke, general secretary of the party, who conceded that despite the hard work done by party workers, the PNP had suffered a "not unexpected" loss.

"We have some serious work to do on the ground; we went into the election with zero budget," Burke said, arguing that the odds were also against the party as it went up against the Government's $600-million debushing exercise that was carried out in the run-up to the elections.

"That augurs well for democracy."

The prized mayoral job in Portmore, St Catherine, remains with the PNP, as the acting mayor Leon Thomas will maintain the top job in the so-called Sunshine City, repelling the challenge of the JLP's Keith Blake.

Nine months after the PNP's loss in the general election, some analysts argued that the party's defeat in the local government polls was not primarily a vote on issues at the community level but a crucial test of Portia Simpson Miller's leadership.

With the results in yesterday's polls apparently leaving the PNP limping, it is left to see if this latest political whipping of the party now in Opposition will once again put Simpson Miller on the back foot, leaving her to contemplate a departure from the helm of the party.

Simpson Miller has lost two general elections, in 2007 and 2016, while scoring a victory in 2011. In the local government polls, the PNP has won one and lost two under the leadership of Simpson Miller.

However, political commentator Martin Henry said yesterday's defeat suffered by the PNP would have no direct impact on her timetable to leave the party.

Both political parties were depending heavily on their base to come out in yesterday's polls to secure a win. However, with about 30 per cent of the electorate exercising their franchise, it is apparent that the JLP outmanoeuvred the PNP on the ground, pulling out more of its diehards to take control of the majority of municipal corporations. Yesterday's low turnout of electors represents a little more than four percentage points fewer (34.7) than those who voted in the 2012 local government polls, while in the February general election, 52.7 per cent of voters cast their ballots.

There was a major upset in yesterday's polls, with former member of parliament for St Elizabeth South Western-turned-candidate caretaker for the PNP, Richard Parchment, losing by 211 votes to the JLP's Donald Simpson for the Malvern division of the parish. In addition, former mayor of Montego Bay, the PNP's Glendon Harris of the Maroon Town division, failed to stave off the challenge of the JLP's Everes Coke, who won by 81 votes.