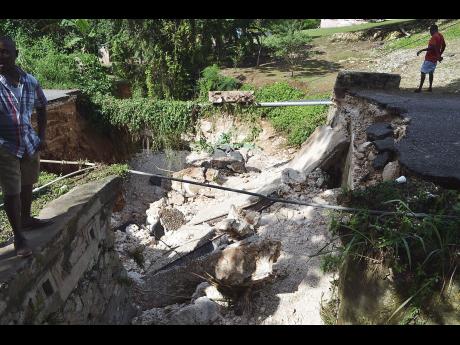 Carl Gilchrist
Residents at the site of a collapsed box culvert along the Dumbarton main road, between Discovery Bay and Brown's Town, St Ann, on Sunday.

Mayor of St Ann's Bay, Michael Belnavis, says rehabilitation on the Mount Edgecombe gully in Runaway Bay, to prevent a recurrence of Sunday's massive flooding in the St Ann town, could cost in the region of $50 million.

The massive flooding that affected Runaway Bay on Sunday is being blamed on the blockage of the gully that runs through the housing development.

"There's a move afoot to do rehabilitation work, for which $3m was allocated some time ago, but based on what happened on Sunday, some pretty extensive work needs to be done," Belnavis pointed out.

"We have to start further up and dig up and redo sections of the gully. We're looking at around $50 million, so this is something the parish council would not be able to do on its own."

Work is currently under way to clean the gully of debris that caused the blockage.

"Work began last night and (the gully) is being cleared and debushed as we speak to prevent any overflow. Things are going good," Belnavis added.

Belnavis also commended councillors Carlton Ricketts of the Dry Harbour division and Winston Lawrence of the Sturge Town disivion for their active response to the emergency, from Sunday leading into Monday.

Clean-up work on the roads has been going well and motorists and pedestrians should have clear passage along the roadways he pointed out.

"All the roads are cleared," Belnavis assured.

Meanwhile, a team from the St Ann Parish Council, along with a technical team from the National Works Agency (NWA), visited Dumbarton where a box culvert collapsed on Sunday following heavy rains in the parish.

Member of parliament for North West St Ann, Dr Dayton Campbell, in highlighting the plight of residents of Dumbarton in the aftermath of the collapsed culvert, has called on the NWA to put emergency systems in place to allow commuters to go about their normal business.

"I'm expecting emergency measures. Something has to be put in place so people can go about their normal business, until a permanent solution is in place," Campbell told The Gleaner.

Some residents have expressed concern about this situation, saying the extended route will mean increased travelling costs.