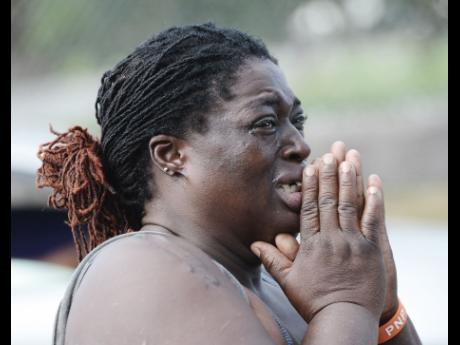 Jermaine Barnaby
Jermaine Barnaby/Freelance PhotographerThis woman was moved to tears after seeing the body of her neighbour, Kerry-Ann Wilson, at the Crystal Towers apartment complex in St Andrew.

For most of this year, 30-year-old Carla* slept with a knife under her pillow as her husband had threatened to kill her.

Carla said he had made two previous attempts to carry out this threat and she was taking no chance this time around.

But after years of abuse, Carla, a mother of one, finally got the courage to run away from the matrimonial home, although she admits that she is still living in fear.

With reports of at least 10 women being murdered across the island in the last two weeks and 24 since the start of this year, the majority by their former lovers, Carla considers herself very lucky. Fifteen women were murdered in domestic disputes last year.

But it pains her when she hears stories like the one where a 45-year-old female resident of Point Hill, St Catherine, was killed by her common-law husband, who is now in police custody.

Reports of the murder of 31-year-old Kerry-Ann Wilson just two days later, the killing of 18-year-old Chantae Thelwell who was fatally stabbed by her ex-lover in Hanover, and Alicia Garey, who was stabbed during an altercation with her ex-boyfriend in Ocho Rios, St Ann, also left Carla numb.

Carla, who stayed with her abuser for more than 10 years, warns women not to take the threats from their ex-lovers lightly. Her husband had taken her to secluded areas outside of Kingston on at least two occasions and told her no one would find her if he killed her and buried her.

Value and love yourself

"Don't take any chances with your life. If somebody threatens you and tell you that they are going to kill you, take heed. Value yourself, love yourself. No man has the right to hit you. They don't have the right to, and don't be foolish enough to blame yourself that you deserve it because you don't," she said.

She said she packed her bag while her husband was away at work one day and took her daughter and fled. Her child was always used as a pawn in their relationship as he often threatened to take her daughter if she left.

But then Carla said she realised it was a case where she would have to kill or be killed in order to escape, and she was just tired of contemplating both scenarios as she lay in bed at night.

"I had to sleep with a knife every day. Whenever we are having sex, I usually had one of my hands behind my back with the knife in it or I hide it under the pillow," said Carla, who explained that although she slept in a separate bed from her husband, he always came to her room and forced her into having sexual intercourse.

She said she went to report the abuse to the police on more than one occasion, but always refused to give them his name as she was fearful of them telling him of the report.

For the most part she said she felt trapped because he was very charming and is the son of a pastor. She felt nobody would believe her.

"He always said the Jamaican police don't have any sense and that if he kills me, he is not going to leave any evidence," she said.

Carla said her husband often threatened her that he would kill himself after killing her. On occasions, he said he would kill her and then serve his time in prison.

Not a bed of roses

But Howard Davis, who was just released on parole a few months ago after he served 10 years for fatally stabbing his common-law wife, warns men that prison is not a bed of roses. He stabbed the mother of his two children because he was told that one of his children was for another man.

"I was bitter. It controlled my nerves and took over my limbs. I was a prisoner to the situation," he said when he explained why he stabbed her.

Davis now spends his time mentoring other men through the Citizen Security and Justice Programme in hopes of teaching men about alternative dispute resolution methods.