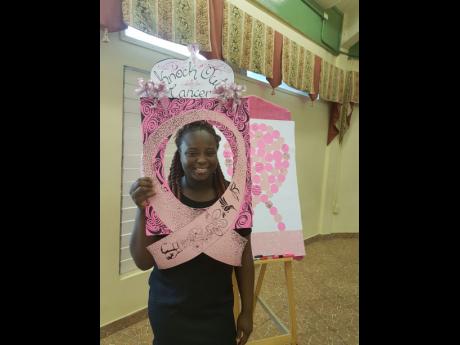 Twenty-one-year-old Kimone Montique serves as a beacon, illuminating youngsters within the Whithorn community in Westmoreland.

An integrated marketing and communications major at the University of the West Indies (UWI), Montique is also a member of the Positive Organization, a Respect Jamaica ambassador, as well as a member of the The Source Community Resource Centre in Savanna-la-Mar, International Y Service and Center for Cultural Interchange (CCI).

"I started volunteering and youth advocacy at the age of 16, when I was introduced to The Source Community Resource Centre in Savanna-la-Mar," she told The Gleaner.

She added: "I initially started out because I needed volunteer hours in order to graduate high school. After my first couple weeks working alongside other youths, I began loving it. This led me to return every day for the rest of that summer, every national holiday, and every event that required community involvement."

Through her affiliation with various community- and youth-oriented initiatives, Montique has executed several projects in her western Jamaica community as well as other environs across the country.

It was that same dedication to service that afforded her the opportunity to pursue her degree, as she was awarded a Governor General Summer of Service Scholarship in 2015.

An event in summer of 2016 is the most memorable for Montique, since she began giving to those in need.

She was given the opportunity to travel abroad on a student work and travel programme and was branded a CCI ambassador.

"As an ambassador, I sat at a table with quite a number of youth advocates from around the world discussing social issues that we are faced with and ways in which we can mitigate these issues. This was an outstanding initiative because it better equipped me with knowledge and resources to return to Jamaica and implement projects based on the specific issues we discussed," she said.

"I strongly believe that personal development is key to helping others, and, in order for me to help others, I must ensure that I am competent enough to initiate such change."

Given her firm academic footing, she offers academic counselling/advice to students who need it in her community.

She is grateful to her family and other persons within her circle of giving for the undying support and motivation they provide.

Montique's vision for her community and the nation in general is constant togetherness and the channels that will foster this positive growth.

In speaking to her longevity in giving and the renewed joy each act brings, she told The Gleaner: "When I get involved, I feel alive; I feel like I am fulfilling my civic duty to my community. Truly, it's not something I can explain because, for me, words are not enough. People normally tell me that they don't know what I get from it, but you won't know until you try it for yourself. It's a great feeling knowing that you can touch a life and make someone smile, if even for a minute. My advice to others is to think of all the moments someone made you happy and how it felt because you received an act of kindness, and if you like it, go out there and do the same for someone else, creating a never-ending chain reaction."

Projects undertaken by Montique in Whithorn:

Projects undertaken by Montique outside of Whithorn: