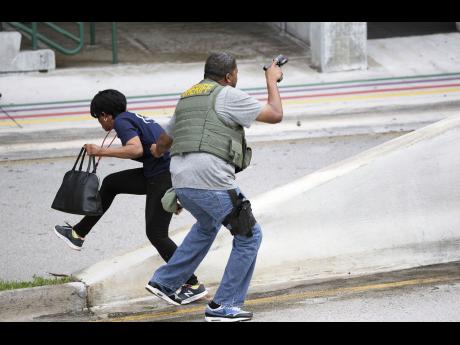 AP
A law-enforcement officer assists a civilian to evacuate an area at the Fort Lauderdale-Hollywood International Airport yesterday. 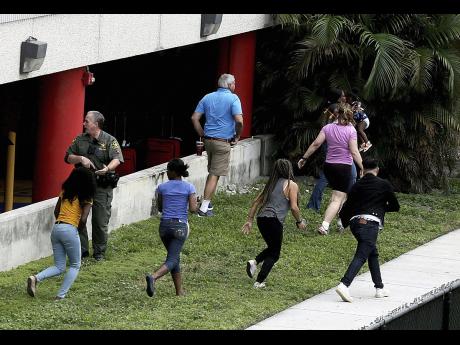 Some level of calm began returning to the Fort Lauderdale airport in Florida, United States, last night after a passenger-turned-gunman opened fire, killing five people and injuring eight others.

The city is home to thousands of Jamaicans and the airport is part of a popular travel route. Up to press time last night, the foreign affairs and foreign ministry could not confirm whether any Jamaican had been affected.

A foreign ministry statement said portfolio minister Kamina Johnson Smith "spoke with Consul General of Jamaica in Miami, Franz Hall, who has begun checks to ascertain whether any Jamaicans were affected by the shooting incident".

"Oh my God, I don't want to die by the bullet. I'd rather grow old and die. I thought I was going to die. We didn't know what was going on!" said April Weiss, a Jamaican who turned up for work at the airport as the incident unfolded. She was speaking on RJR's 'Beyond the Headlines'.

An arriving airline passenger pulled a gun from his luggage and opened fire in the baggage claim area in Terminal 2, killing five people and wounding eight before throwing his weapon down and lying spread-eagle on the ground, authorities and witnesses said.

The gunman was immediately taken into custody. Authorities gave no details on a possible motive for the shooting which sent panicked passengers running out of the terminal and on to the tarmac, baggage in hand, and forced the shutdown of the entire airport.

Chip LaMarca, a Broward County commissioner who was briefed on the attack by the sheriff's office, told The Associated Press that the shooter had arrived aboard a Canadian flight with a gun in a checked bag. "After he claimed his bag, he went into the bathroom and loaded the gun and started shooting. We don't know why."

It is legal for airline passengers to carry guns and ammunition as long as the firearms are put in a checked bag, not in a carry-on, and are unloaded and locked in a hard-sided container. Guns must be declared to the airline at check-in.

- Additional reporting by the Associated Press