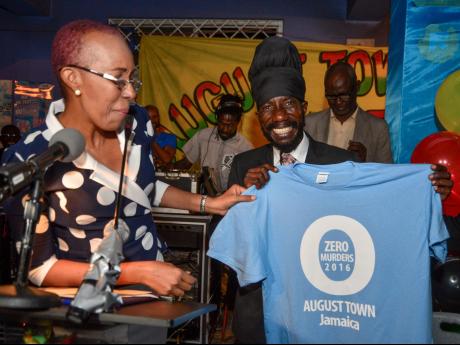 Cheerful music, the knocking of dominoes and frisky children romping in green spaces were the sights that greeted our news team last Friday as residents of the St Andrew community of August Town celebrated a year without any murders.

In a year when more than 1,350 persons were murdered across the island, an 11 per cent increase over 2015, August Town leaders were beaming that the once volatile and deadly inner-city community added nothing to this count.

"There was once a time, nobody would come to August Town because of the crime and violence we had here. At one time, every time August Town made the news, it was for something bad, such as a shooting. I feel so proud that today, August Town is in the news for positive things," said Charmaine, as she beamed with pride.

"Gun used to bark in August Town, but right now, it's just love and peace ... nothing but that, and we love that," added Charmaine.

The residents gathered in Bryce Hill Square Friday evening to celebrate what they deem a significant milestone.

PRAISES FOR THE PEACE BUILDERS

Member of Parliament for the area Fayval Williams heaped praises on the Sizzla Youth Foundation, the Peace Management Initiative, the police and the University of the West Indies (UWI), who she described as the key peace builders who worked to ensure that the community remained murder free last year.

Williams used the event to distribute 500 T-shirts with the tag '0 murders in 2016, August Town Jamaica'.

Wilson, who was the master of ceremonies for the function, said August Town has come a far way and vowed to continue the work to maintain peace in the community.

Olivene Burke, who spoke on behalf of the neighbouring UWI, said the investment of the university to the tune of over $50 million in the community has paid off.

Burke said the efforts of the late university professor, Barry Chevannes, and the signing of a peace agreement in 2008 also played a major role in transforming the community.

On June 24, 2008, August Town's corner leaders signed a peace agreement to end gang violence that had resulted in significant loss of life, caused incalculable trauma and retarded the social and economic development of the community.

The agreement prohibited the carrying and shooting of guns and intimidation in the community.

It also required that community leaders steer members of their area away from violence and encourage tolerance for people of different political beliefs.

The agreement also set up a peace council charged with the responsibility of monitoring adherence to the terms of the agreement.