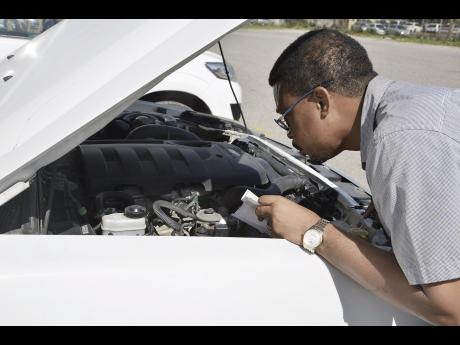 Complaints from persons renewing fitness certificates for their vehicles at the Swallowfield Examination Depot in St Andrew that they were being badly inconvenienced by the length of time it took for them to get through using the newly implemented motor vehicle management system have not fallen on deaf ears.

The new system, which was launched on Tuesday, but which came into effect yesterday, was set up by the Ministry of Transport and Mining to help reduce persons' waiting time to renew fitness certificates. It is also part of plans to combine systems used by different government agencies for greater efficiency.

A reduced waiting time was not the case for a number of persons. One woman, who wasn't aware of the changes, told The Gleaner that she had to wait more than two hours before completing the process.

Michael Spencer, who was at the depot from 10 a.m., and who was there long past 12:15 p.m., said that he was not very confident about the new system.

One woman, who gave her name as Angie, was more understanding than the others; however, she, too, waited some time.

"Since I am normally working with systems, I understand the delay, and that when you are doing a pilot project that it does take extra time, so I am willing to give and take. It wasn't any faster than it normally is, but I suppose it will improve."

In short order, things will improve, according to Vando Palmer, director of public relations and communications in the Ministry of Transport and Mining.

Palmer explained that there was a verification problem, so the names of some persons did not come up on the system. They had to resort to old manual procedures, which they used alongside the electronic system.