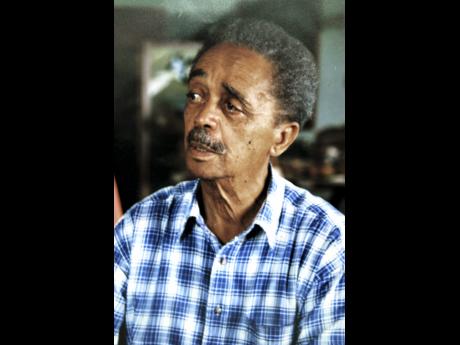 According to police reports, Abrahams, who would have turned 98 in March, was found dead in his remote Red Hills, St Andrew, home yesterday in a pool of blood.

Head of the Jamaica Constabulary Force Corporate Communications Unit Superintendent Stephanie Lindsay disclosed that investigators are still uncertain as to the cause of death of the veteran journalist and political commentator.

"They (police investigators) don't have any reasons to suspect foul play, but they are not ruling out anything at the moment," Lindsay told The Gleaner. "Blood was found at the scene, but based on what the investigators are saying, there is a possibility he could have fallen from the wheelchair, but there is a lot of blood at the scene."

The Gleaner understands that Abrahams experienced at least five break-ins at his home in four months in 2016, which resulted in an alarm system being installed.

Described as one of the most prolific South African black prose writers, he was born on March 19, 1919, in the Vrededorp neighbourhood near Johannesburg. His early novel Mine Boy (1946) was the first to depict the degrading and demeaning effect racism had on blacks in apartheid South Africa.

Abrahams left South Africa at the age of 20, first settling in Britain and then in Jamaica. Here, he waged war against apartheid through his various literary works and his radio commentary on Radio Jamaica. The prolific expatriate novelist, who made Jamaica his home in 1956, came here to write a book that was commissioned by the British Government and which was published under the title Jamaica: An Island Mosaic.

Chief Executive Officer (CEO) of The Gleaner-Radio Jamaica group Gary Allen described the late commentator as one of the finest minds he had encountered in his many years in media.

"His was one of the most brilliant minds that I have come across. His experience was so vast, from living in Africa, being involved in the anti-apartheid struggles, exiled in Africa, moving to England and then to Jamaica on the invitation of the late Norman Manley," Allen shared with The Gleaner about the late editor of Public Opinion.

According to Allen, Abrahams - whose voice was a staple on RJR each day at 6:05 p.m. for news commentary - experienced racism in his own family as his wife Daphne's family was unhappy that she married a black man.

They had three children, one of whom is deceased.

"It is strange for those who are close to him that he is no longer here because at age 97, he was so very lucid. He was still writing and had an ambitious give-back that he was working on for Jamaica. He was prolific on his computer," added Allen.

Head of the Caribbean Institute of Media and Communication Professor Hopeton Dunn was shocked to hear of Abrahams' death.

"I am shocked and saddened by the passing of Peter Abrahams. He is a literary icon and journalist of international repute, who is the grandfather of the RJR Group as we know it," said Dunn, himself a former journalist.

"He has made a huge contribution in the area of the Pan African struggles for decolonisation in Africa and the Caribbean."

Peter Abrahams' last public utterance was in the form of a Letter to the Editor published on Wednesday, January 17, in The Gleaner.