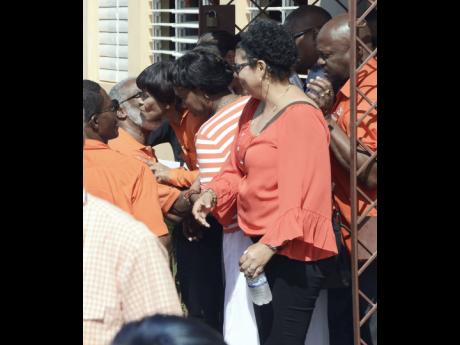 She said she would, however, remain a member of parliament.

Simpson Miller, who was addressing Comrades at Hatfield Primary and Junior High School in Manchester yesterday, initially left NEC members shocked when she pronounced blessings on Jamaica and the party after stating only that she would submit her resignation some time after making her contribution to the Budget Debate on March 16.

However, after a hurried consultation with officers, she returned to give her official departure date.

According to PNP General Secretary Julian Robinson, she will hand in her resignation to the governor general after a special delegates' conference is held on March 26 for the election of the party's new president.

Nominations for the post will open today and end on Friday.

Robinson admitted that Simpson Miller did consult with officers before giving the departure date.

However, he did not say what the consultation was about, and whether it was initiated by Simpson Miller or the officers.

Her address to the NEC brought out an angry Simpson Miller, who turned on those she said spoke negatively of her intellect and of her becoming PNP president.

In a relatively short stint at the podium, she said she had served the party for more than 40 years and had given faithful and loyal service to both Michael Manley and P.J. Patterson before her. She said she was criticised heavily when she became president, as many believed a woman should never lead the PNP.

According to her, the comments came at a time when women were leading parties and becoming leaders around the world.

"Some a dem say, 'She a eediat.' But mi neva know say eediat can get a bachelor's degree from a university in the United States," she told the members, some of whom clapped, while others on the outside murmured that "she always come with this crap".

Even Karl Blythe, the man who challenged Simpson Miler at the party's last annual conference, was forced to admit that the mood of the conference was not what he had expected. He said sadness was everywhere.

"Mixed feelings. I am a little sad about how it's going. I again feel that there is some unhappiness in the way she is tending. I know it's a necessary thing. It should have happened before, but today I don't want to say much," said the former PNP vice-president.

Blythe was one of four, including Simpson Miller, who sought to replace Patterson, who stepped aside in 2006.

"Not at all," said Blythe when asked if he would challenge again.

"I am here to support my party in whatever way they want, but not as leader," he stated.

However, he expressed his own unhappiness at the mood of the meeting.

"I am trying to reason with myself why I feel that way. I wanted and I knew it was time for her to go. But when you say 'goodbye', you want to say in an atmosphere of comradeship. I couldn't feel it today," said Blythe.

One of Simpson Miller's most trusted and loyal supporters, Senator Floyd Morris, said he was happy for her.

"I am happy for her and her contribution to the PNP and for her service to the country. I continue to love her, I continue to support her, and I will forever be loyal to Portia Simpson Miller," said Morris, shortly after the party president finished her speech.