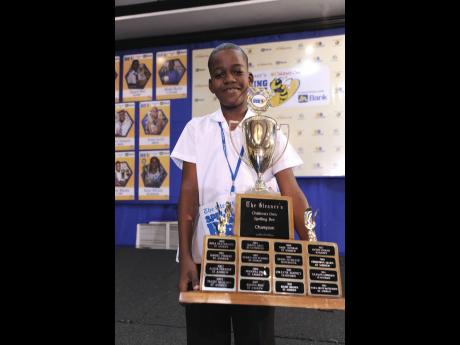 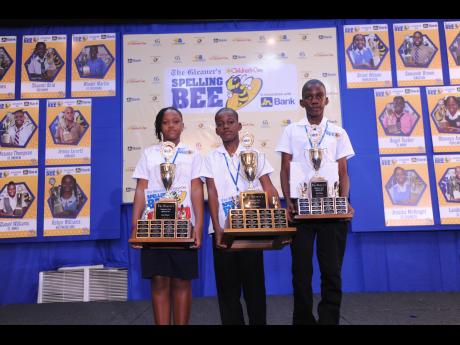 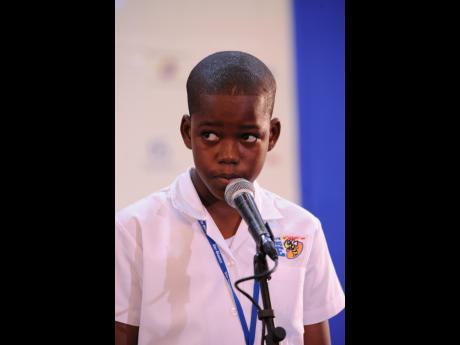 Gleaner Photo
Deneiro Hines takes on one of the challenging words.
1
2
3

When the dust settled on the 2017 finals of the Gleaner's Children's Own Spelling Bee Competition, it was Deneiro Hines, the Clarendon pacesetter, who was crowned the 58th National Spelling Bee Champion.

After a very taxing morning segment, which saw 168 words equally divided among the 14 finalists, 16 of which were misspelled, eight Bees advanced to the final spelldown in the afternoon.

It now became a test of nerves as the clever crop exercised great caution, seeking repetitive pronunciations, definitions, and origins to reassure themselves.

The youngster of the competition, seven-year-old Zara Wallace of St Ann, was the first to falter at the new bar.

St James, Kingston, and Westmoreland followed in quick succession, to narrow the field to the fantastic four.

St Elizabeth Bee Jessica McKnight was the first to blink in the pressure cooker of a round.

St Catherine representative Windel Martin went next in the sequence.

Thompson was now given the championship word, t-h-i-x-o-t-r-o-p-y, but couldn't find the winner.

Hines then capitalised and nailed the word b-r-o-u-g-h-a-m, while Thompson stumbled again over c-h-a-r-m-e-u-s-e, which was conquered by Hines.

In the end, it was the word e-p-a-n-a-l-e-p-s-i-s that granted the first form Glenmuir pupil the win and saw Thompson place second once more.

... Champ confident he can win at Scripps

For the 12-year-old accounting aspirant, the victory is a culmination of hard work and dedication.

He told The Gleaner: "I'm just happy right now. I've gotten a lot a support from my friends, my mother who stayed up with me at nights and my coach is wonderful. I was more nervous at the top three or four stage, but when it came down to the two of us I was confident in myself."

He added: "This has motivated me and I'm confident I can go to Scripps and do well enough to win."

Coach Errol Campbell cited discipline and humility as key ingredients for Hines' success, while being cautiously optimistic about the hurdle that now lie in wait.

He told The Gleaner: "Coaching him was a pleasure. He listens to instructions and executes accordingly. We had our days when things were off but we learned and improved on them. We've already began some work as it relates to Scripps so it's just to take a more aggressive approach in terms of preparation."

I have to say God is good - Daniel
Grandma helped Kesean to prepare for Spelling Bee
She knew other spellers were after her title, so Rhonoya she worked harder
Word-for-word showdown of the Bees
Manchester champ coached by her Dad