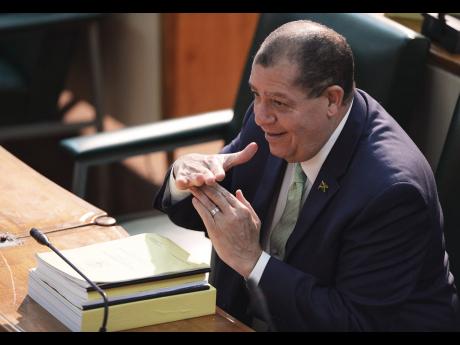 A review of the Government's revenue estimates indicates that the Andrew Holness administration intends to increase its tax intake by $62 billion this fiscal year.

Of significance is that the Government is projecting to rake in $15 billion from General Consumption Tax, while an additional $6 billion is expected to be realised from Special Consumption Tax. A government source said that the tax authorities have been mandated to pursue an aggressive tax-compliance campaign to collect unpaid revenues.

In this regard, the Government will also be stepping up its efforts to drag delinquent taxpayers into the net, earmarking an increase of nearly $20 billion in income taxes, while company taxes are forecast to increase by $4 billion.

Travel tax is anticipated to pull in $3.4 billion more, while revenue from passenger levy is projected to increase by $1.1 billion.

The Government will also be targeting increased revenues from import duties this year as it targets an increase of $4 billion.

The Government is proposing to increase public spending by nearly 20 per cent in the 2017-2018 financial year, representing an increase of almost 20 per cent over the $592.7 billion it spent for the previous fiscal year.

Minister of Finance and the Public Service Audley Shaw yesterday tabled the Estimates of Expenditure and Revenues in Parliament, setting out the administration's plans to increase its spending by $117.2 billion for the new fiscal year to $710 billion.

The administration will this fiscal year be spending $193 billion on wages, which represents almost seven per cent higher than the sum allocated for paying public-sector workers last year. With unions representing public-sector workers gearing up to begin negotiations with the Government, the additional amounts allocated for wages this year signal the percentage increase that the administration is prepared to pay.

Financial analyst Ralston Hyman said that he was surprised by the nominal increase in the Budget, noting that wages and debt service charges would consume 70 per cent of the Budget which is still the same trajectory the country has been on for a long time.

"We are also seeing that the capital budget is projected at only $52 billion or 7.3 per cent of the Budget which again is a disappointment because we must be reallocating from wages and salaries to capital if we are going to accelerate economic growth," Hyman said.