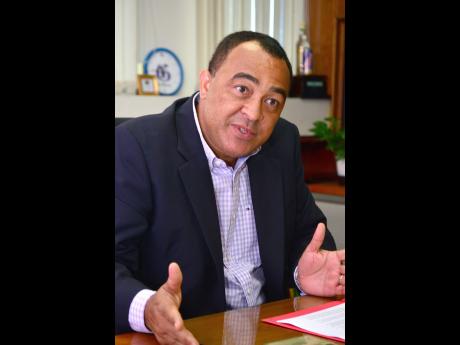 It could take as long as six months for normality to return to the Cornwall Regional Hospital (CRH) in Montego Bay, St James, which has been operating below capacity since Monday because of a problematic ventilation system that has been releasing noxious fumes on the facility's first three floors.

Speaking at a press conference at the Mt Salem-based hospital yesterday, Health Minister Dr Christopher Tufton said that based on the complex nature of the problem, rectifying the situation to restore normality would not be a quick fix.

"This is a system that was out of operation for some time, close to 20 years, and was recommissioned, and apparently, was not sufficiently sanitised," explained Tufton. "The recommissioning led to these fumes being sent through the hospital system, and in particular, the first three floors of the hospital, where the ventilation system was primarily located."

He continued: "There is not going to be a temporary or short-term solution to the problem that the hospital currently faces. It is going to be more medium-term measured, and I am looking at three to six months. The logistics of that are going to be challenging and, therefore, the hospital's management, supported by the ministry and other stakeholder groups, will have to adjust to these new arrangements."

According to the minister, to effectively address the issue, three strategies will be employed to protect the health of patients and staff and to keep all parties informed on the progress of the restoration work. This will include "to relocate affected areas in the interest of public safety, staff and patients; to communicate effectively so the management of the dislocation can be done as best as possible; and to mount and support a technical team for the restoration and normalcy of the institution", he noted.

Some of the critical services, including the operations of the accident and emergency department, have been relocated to other sections of the hospital. Makeshift tents have also been erected at the hospital and some services transferred to rented space at the West Jamaica Conference Centre.

Departments that have been relocated from the main hospital building are the physiotherapy, cytology, obstetrics and gynaecology departments, the psychiatric clinic, and three supporting labs.

Steps are also being taken to limit the number of cases being sent there, with some being referred to the Mount Salem Health Centre. Persons with non-urgent cases are asked to visit the health centres closest to their homes.

Persons who have questions with regard to their appointments can contact the hospital at telephone number 684-4041. Additional numbers will be added shortly.