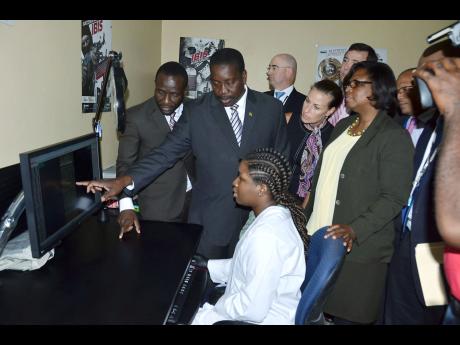 The handover of a Bullettrax System to the Institute of Forensic Science yesterday marks an important part of the Government's effort to combat the illicit trafficking in firearms and ammunition, National Security Minister Robert Montague said, adding that the new technology will add another dimension in the ongoing fight to lessen gun crimes in Jamaica.

"We cannot stamp out the scourge of crime and murders in Jamaica unless we overcome our gun problem. That is why

we have been on a serious mission to tackle the problem comprehensively and from various fronts," the minister said said.

"A big part of the effort is in building our forensic and ballistics capabilities. We are in the technology age, and Jamaica is committed to the strategic use of science and technology in this fight to create a safer and more prosperous Jamaica."

The Bullettrax System (Bullet Imaging Solution) will be able to capture digital images of the surface of bullets, match the images in a database, suggest potential matches with other bullets, and bolster the institute's capacity in collecting information from ammunition.

According to Montague, the Forensic Institute now boasts some of the most advanced ballistics equipment in the Caribbean, and its Integrated Ballistics Identification System is already having a positive impact on the investigation and handling of gun crimes.

"We are working very hard to dry up the supply of illicit firearms and ammunition in the country. In this regard, the initiative by the police in their Get the Guns campaign has resulted in more than 700 illegal guns being taken off the streets and 8,721 rounds of ammunition seized in 2016," he said.

One hundred and sixty-three illegal firearms have been taken off the streets by the police between January 1 and March 11, compared to 118 in 2016 for the same period. In terms of ammunition, they have seized 1,684 rounds over the same time period compared to 1,592 last year.

"Jamaica does not have an arms-manufacturing industry, we do not produce guns, and the legal importation and ownership of guns in the country is tightly regulated, yet more than 70 per cent of the murders committed in Jamaica involve the use of firearms, the majority being guns illegally brought into the island," said Montague.

The addition to the nation's crime-fighting capabilities is part of a two-year Technical Assistance Package facilitated by the United Nations Regional Centre for Peace Disarmament and Development in Latin America and the Caribbean.