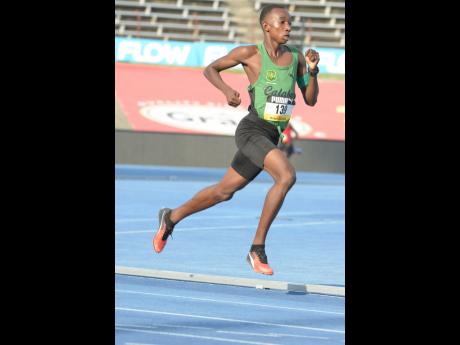 Kimar Farquharson showed impressive power and endurance, while Shanette Allison was explosive and commanding, both bothering the record-keepers on yesterday's opening day of the ISSA-GraceKennedy Boys and Girls' Athletics Championships at the National Stadium.

There were no points to be scored, nor any bragging rights to be secured - those will come later on. However, the island's top young stars wasted little time in setting flame to the stadium Mondo in an exciting Champs curtain-raiser.

Holmwood Technical's Allison stood with her arms folded as pre-meet favourite Britany Anderson from Vere Technical assaulted the clock in her Class Two girls' 100m hurdles heat, crossing the line in 13.37 seconds to lower the 13.38-second mark set by Peta-Gaye Williams (Camperdown) in 2013.

When it was her time to face the starter, Allison went about her business like a lady with a point to prove, dominating the field to take the record even lower, stopping the clock at 13.30 seconds to hastily take the record away from her rival from Hayes in Clarendon. The two are the only athletes to have run below 13.40 seconds this season, and when they come together later week, it's sure to be an interesting meeting.

Calabar's Farquharson stands head and shoulders above everybody else in the Class Two 800m, and in all honesty is the best schoolboy half-miler in the country. He showed that class and perhaps sent a bolt of 'vibes' to his team's base with a blistering 1:51.26 run in his heat to brush aside Aldwyn Sappleton's 20-year record of 1:52.27.

This gets even more serious on today's second-day programme with points up for grabs with three finals being contested.

Aiko Jones (Wolmer's) landed the disc 40.91m to lead all qualifiers into the Class One girls discus final with the Edwin Allen pair of Fiona Richards (40.05m) and Sheika McPherson (38.43m).