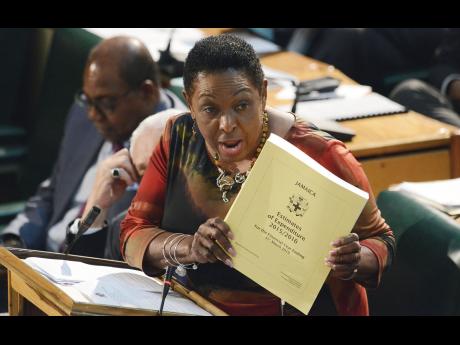 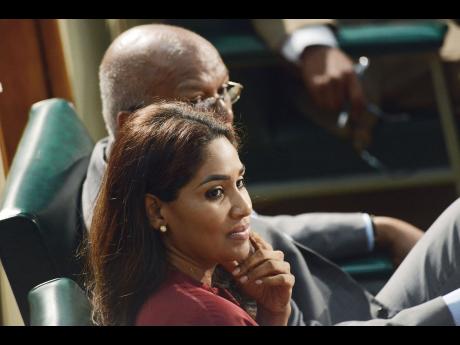 Culture Minister Olivia Grange has rubbished claims by the South East St Ann Member of Parliament, Lisa Hanna, who, a day before, accused the minister of nepotism and corruption in the awarding of a contract for the Jamaica Emancipation and Heritage Week celebrations.

Calling Hanna's statement to Parliament on Tuesday erroneous, Grange said that it was hurtful not only to her, but also to the professionals who work with the Government.

"Big, fat lie; false news like plastic rice," Grange said as she sought to clear the air about the allegations.

She explained that the $440 million was allocated to the Ministry of Culture, Gender, Entertainment, and Sports for Emancipation and Heritage Week in 2017-18.

"She (Hanna) said that of the $440 million, only $60 million was allocated to the Jamaica Cultural Development Commission (JCDC) for promotion of cultural activities, and then asked, suggesting that some corruption had taken place, 'Where has the rest of the money gone?'" Grange said.

In outlining what she said was the truth, Grange made reference to the Estimates of Expenditure for fiscal year 2017-2018. It referenced the $440 million referred to by Hanna, stating that the money was for the promotion of cultural activities and celebration of national events.

Grange rebuffed Hanna's claim that the spend on the 2016 Grand Gala was $65 million, telling Parliament that the total cost was $62.5 million, approximately $2.5 million less than what was reported by Hanna.

Referencing a contract that was awarded to an artistic director in 2016, Grange indicated that the same person was given a contract in 2012, valued at $70 million when Hanna was culture minister.

Grange slammed Hanna, saying that there were legitimate channels, including the Access to Information and whistle-blower law, which allowed individuals to ask for and receive information.

"Instead, the MP has relied on leaked information, innuendos, and misinformation to arrive at faulty conclusions," Grange said.

But in a quick response, Hanna dismissed Grange's call for her to apologise.

"I stand by what I said," a defiant Hanna declared.

Hanna accused her government counterpart of ignoring the main issue she raised in Gordon House on Tuesday.

Pointing to the Office of the Contractor General's report of investigation into the Jamaica 50 celebrations, which was tabled in Parliament on Tuesday, Hanna said that the contractor general stated that in 2012, there was a public tender for the contract for the Grand Gala.

"It was no secret contract. Several companies tendered for it, and the JAMBIZ International won the tender," Hanna asserted, noting that Grange's comment that she (Hanna) gave JAMBIZ a contract in 2012 was "erroneous".

Insisting that her claim of alleged nepotism had not been addressed by Grange, Hanna said: "I am going to give to the prime minister the records of what I produced yesterday (April 4). That $15 million for an artistic director is from a gentleman who wrote the letter on May 27, and on June 22, he got the contract. On July 15, he was awarded $15 million before the end of the event."

Hanna argued that the artistic director is a business partner in JAMBIZ.

"That is what I was raising - the nepotism in the ministry."