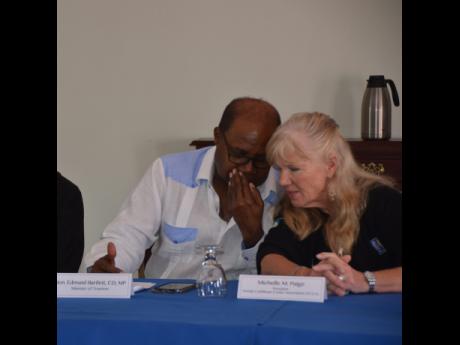 Minister of Tourism, Edmund Bartlett having a quiet word with president of the FCCA Michele Paige.

Rejecting any scepticism regarding Jamaica, president of the powerful Florida Caribbean Cruise Association (FCCA), Michele Paige, has endorsed the island as a first-call destination for cruise shipping.

Paige, who spent three days, along with other FCCA officials, visiting ports, attractions and interacting with Jamaican stakeholders, said while there have been some well-documented problems with Jamaica as a port of call, there is now every reason to believe the authorities are serious about transformation.

"Jamaica must be commended for putting measures in place to becoming a first call destination for cruise shipping. What we have seen over the past three days has been nothing short of remarkable," said Paige.

According to Paige, she can safely say that the Jamaican Government and the people it represents are serious about cruise shipping and the partnership with the cruise lines over the past 50 years.

Referencing a recent meeting with Prime Minister Andrew Holness in Florida, who made promises of a new beginning, Paige admitted that their response was "basically one of polite scepticism ... a let's wait and see".

"Yes, we know that the Jamaican experience can be great, but we were also aware that there were some impediments," said Paige.

"We had basically heard the 'things will be better' speech before and wanted to see some action behind the words. Well, we came, and I must say the authorities have been doing a lot of work, and this certainly bodes well for the future of Jamaica's cruise shipping."

Paige also noted that it has been more than 20 years since the FCCA has had a meeting in Jamaica at such a high level, adding that, "We wanted to come and see for ourselves if things were going as well as advertised."

She said the FCCA team was particularly impressed by the fact that the visit coincided with ships being in the three major cruise ports of Falmouth, Ocho Rios, and Montego Bay, and where they had a chance to see things at first hand and without anything being scripted.

"The commitment from Jamaica would suggest that you guys want to get to the next level," said Paige.

"What I saw from the people was a justification for the cruise lines to stay longer in port and an understanding and an appreciation of the industry. We are all in this together. We must always remember that happy crew equates to happy guests and happy guests spend money."

An elated Tourism Minister Edmund Bartlett said that hearing the FCCA president speaking so glowingly about Jamaica was the clearest indication yet that the island is poised to be the top cruise destination in the region.

"These people are not about mincing words or making loose talk," said Bartlett.

"This kind of endorsement is priceless and tells me we have been doing some things right. There is, however, no room for complacency and we must continue to work as hard as we can to keep things in order."