No party leader dictatorship, says Phillips - New Opposition leader explains why he is not asking senators to resign 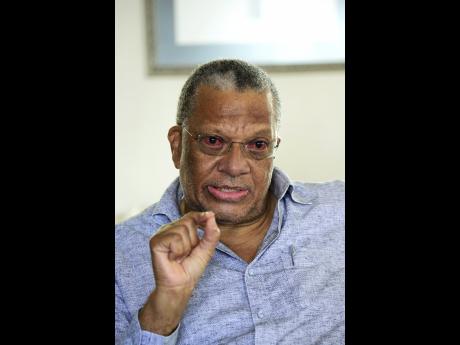 With the debate continuing on whether senators appointed by Opposition Leader Portia Simpson Miller should resign en bloc with the change in leadership of the parliamentary Opposition, the new man in the job, Dr Peter Phillips, has reiterated that he is not calling for their resignations.

Addressing a Gleaner Editors' Forum last Friday, Phillips, who was recently elected president of the People's National Party (PNP), before being sworn in as Opposition leader, said he has no need to change the senators to put his stamp on the party infrastructure.

"Every one of the senators inside there now is a member of the party in good standing, who has my full respect and confidence," Phillips told Gleaner editors and reporters at the Gleaner's North Street, central Kingston, head office.

The veteran politician said persons calling for the appointment of new senators who might be more in sync with his personal philosophy were out of touch with the vision of the framers of Jamaica's postcolonial Constitution.

"That requires some measure of independence and particularly in the Senate, where it was intended as a deliberative body," he explained.

According to Phillips, the PNP has always respected the rights of its members to differ fundamentally on issues of critical importance to development of the party, as well as the country.

He argued that to entertain the call by those in favour of a 'Peter Phillips Senate' would be to "consolidate party leadership dictatorship", which was not his intention.

"We are not dictators over anyone. We are democrats in the most fundamental way. Should at any point in time any member of the Senate feels, in conscience, that they want to, for whatever reason, offer their resignation (that is fine) but I am not asking, not seeking (it) as any condition of change of leadership.

"Our primary purpose is to strengthen the democratic process of the country and to ensure that the People's National Party remains a unified whole with a common purpose," said Phillips.

The eight opposition senators were expected to meet last week to decide if they would resign en bloc, but so far the results of that deliberation have not been made public.