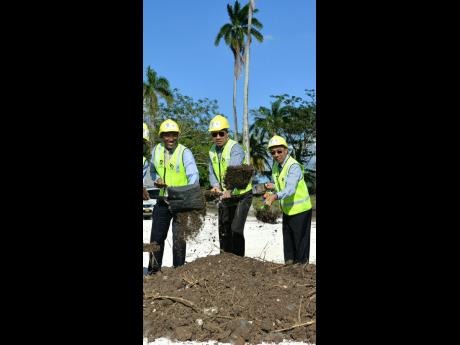 File
Prime Minister Andrew Holness (centre) breaks ground for one of the developments expected to tax the water supply in Negril, the NHT housing project in Shrewsbury, Westmoreland, on March 24. Chairman of the NHT, Nigel Clarke (left) and and Cabinet member Dr Horace Chang also participated in the groundbreaking.

The National Water Commission (NWC) has admitted that it is losing the battle to supply the resort town of Negril with potable water.

Regional water supply and distribution manager at the NWC Dr Richard Meggoe last week warned that the expansion of its water supply system was not keeping apace with the massive housing and hotel developments taking place in the town.

According to Meggoe, Negril is going to have a carrying-capacity issue where water supply is concerned as the water source in Logwood, Hanover, which supplies the resort town, is severely stressed.

He said that there has been a significant reduction of rainfall in Hanover, which has resulted in meteorologists characterising the parish as being in a state of severe drought.

"As it is now, Negril is supplied from the Logwood Water Treatment System, which has a capacity of about five million gallons per day ... with the expansion of the tourism product in Negril, it has placed some stress on the system.

"I remember two years ago, there was a crisis situation where there had to be trucks on the Boulevard in and out, and the simple reason for this is that Logwood is served by a blue hole, and it is seasonal," added Meggoe during a Negril Chamber of Commerce meeting in the town last Thursday.

"The unique situation of Negril is that Jamaica's dry season coincides with the tourist season. We know that tourism utilises anywhere between four to 10 times the water that the locals would use, so it is really a water-intensive industry.

"As it is right now, the Logwood blue hole, the inflows to it have fallen by 80 per cent. That have translated into a reduction of output by about two million gallons per day. So you really see that it is a crisis situation. We are having expansion and we are having a reduction in supply," added Meggoe.