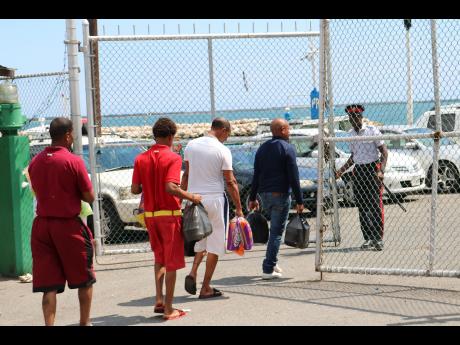 Christopher Serju
Some of the 59 Dominican Republican fishermen make their way back to the fishing vessel Almah Rosa with food supplies under police escort after pleading guilty to various charges relating to illegal fishing in Jamaican waters, during Monday’s special sitting of the Kingston and St Andrew parish court. They were fined a total of J$11 million which must be paid before they will be allowed to return home.

The 59 Dominican Republican fishermen who, on Monday, pleaded guilty to various breaches of Jamaica's Fishing Industry Act and who were fined a total of $11 million are still in the custody of local authorities because the fines - which range from $125,000 for 56 of the poachers, to $2.5 million for the captain, and $750,000 for his two deputies - had not been paid up to press time.

Superintendent Carl Ferguson yesterday confirmed that the men were still in custody, pending payment of the fines. Failure to pay the fines will see the men serving sentences ranging from 10 to 30 days. He explained that while sentences for 10 days could be served in a local jail, the 30-day sentences would have to be served in one of the country's adult correctional facilities.

Ferguson, however, was optimistic that the fines would be paid.

In addition to the fines, all of the 7,600 pounds of fish on board the Almah Rosa was confiscated, as well as some of the fishing equipment. However, the judge opted not to confiscate the fishing vessel, even though the Crown had asked that this be done on the grounds that it would serve as a major deterrent.

Meanwhile, 16 of the 24 Jamaican fishermen, who were also held by the Jamaica Defence Force Coast Guard during the same incident, pleaded not guilty and are set to return to court on Monday, April 24.