Centenarian reflects on Easter over the years 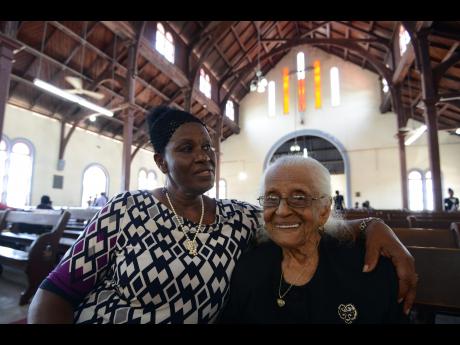 Having been blessed to see her 100th birthday in January, Hazel Espeut has seen many Easters. Nevertheless, the centenarian said she never grows tired of celebrating the death, burial and resurrection of Jesus Christ during the holy season.

Yesterday, Espeut was among the congregants who attended the annual Good Friday service at St Michael's Church in Kingston, where she ministered to the audience through the poem Crucifixion.

"It's a sacred time for me. I look forward to this time every year," she told The Gleaner. "I say the poem every year. There is a section which talks about the interaction between Jesus and His mother; that part is most sacred for me. It touches a lot of people also."

The 100-year-old, however, expressed disappointment with the waning interest she has seen developing over the years, especially among the youth population, indicating that Easter is beginning to lose its significance.

"Growing up, it was much more sacred. Persons' attitudes were much different. The younger people today, however, don't seem to understand what it is all about. Times have changed. There is not enough recognition for Good Friday; there is no reverence. It means nothing to some of them now," said Espeut.

"I would love to see things go back to where it was, especially with the young people. I'm looking forward to church on Sunday, but that depends on how I feel. Sometimes I feel a lot of pain, sometimes I can hardly move, but all being well, I will be here because this is where I have been coming all my life (St Michael's Church)."