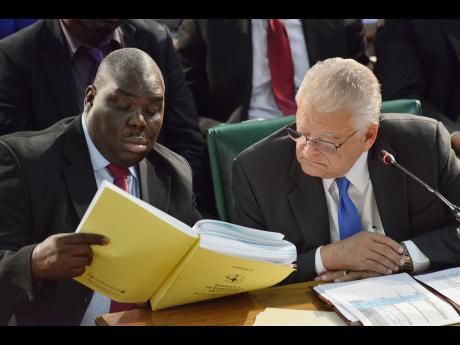 Karl Samuda, the minister of industry, commerce and agriculture, is moving to tidy up an untidy situation that now exists, with the National Compliance and Regulatory Authority (NCRA) being part of the Bureau of Standards Jamaica (BSJ).

In 2015, the regulatory division of the BSJ was formed into a new entity called the NCRA, with millions of US dollars in grant funding from the World Bank.

Though still part of the BSJ, the new entity was given its own management team and the responsibility for registering processed food establishments, inspecting goods at ports of entry and in the local market, and ensuring compliance as well as performing regulatory functions.

The NCRA would then refer goods to the BSJ, if necessary, for scientific testing to be carried out.

The new entity was deemed needed, as international partners argued that there was an inherent conflict of interest with the BSJ performing conformity assessments, setting standards, and then seeking to regulate the standards it had set, which is contrary to the World Trade Organisation's requirements.

But the NCRA was not constituted under law to operate independently, resulting in its management still reporting to the board of the BSJ, raising concerns that the country's export sector could be affected as international partners would be wary of the messy marriage.

"The international standard is that you can't have the regulatory arm being the same agency that does the testing. That is the whole basis on which the NCRA was established, and it was established through the authority of the Cabinet," Samuda told The Sunday Gleaner.

"So it (NCRA) is actually functioning now, quite frankly, as a department of the Bureau of Standards, which it should not be doing. So we are seeking now to take corrective measures by introducing in Parliament a bill that will separate it and make it an independent entity.

"We are acting on it immediately. The legal team in the ministry has commenced the process of putting together an appropriate piece of legislation that will go through the various stages. It is a bit of an untidy situation at the moment, so we are going to tidy it up," added Samuda.

He argued that despite the absence of the necessary legislative framework to give the NCRA autonomy, it was legitimately established and will continue to carry out its regulatory functions under the umbrella of the BSJ until the legislation is in place.

In the meantime, Donovan Stanberry, permanent secretary in the Ministry of Industry, Commerce and Agriculture, sought to further explain how the NCRA came into being.

"It is an interim arrangement where the bureau, by virtue of its power to delegate under the Standard Act, delegated that specific responsibility to the NCRA," said Stanberry.

"The NCRA is a special creature that, in essence, is like a subsidiary of the bureau which reports ultimately to the chairman of the board (of the BSJ). We are working with the consultants to do the legislation to establish this thing and do a clean and final separation.

"The critical thing is to accelerate the work on the new bill to get this thing finally established and separated," said Stanberry.