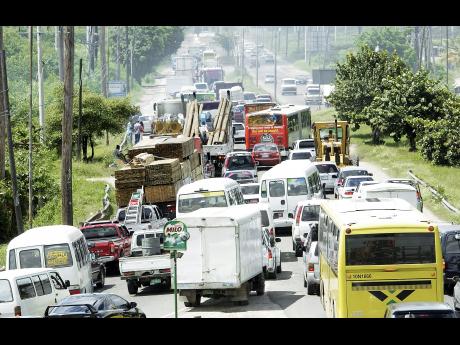 Ricardo Makyn
A traffic pile-up along Mandela Highway, similar to what is expected when the JUTC dedicated bus lane comes to an emd on Thursday.

The Jamaica Urban Transit Company (JUTC) has warned commuters to brace for long delays on its Spanish Town, St Catherine, route, starting Thursday, when it discontinues the dedicated bus lane on the Mandela Highway.

The JUTC introduced the dedicated bus lane in November 2013 and continued its use despite protests from private motorists who argued that it was cutting into their travel time.

The state-run bus company argued that the dedicated bus lane was allowing it to save millions on fuel and moving passengers quicker.

But in a statement yesterday, the company said the dedicated lane would be discontinued as improvement work on the Mandela Highway was being done.

"The discontinuation of the bus lanes means all JUTC buses out of Spanish Town will traverse the regular lanes, resulting in significant increase in travel time and hence reducing the number of cycle trips during the morning commute," warned the bus company in a release.

"Commuters should therefore expect longer than normal delays and are encouraged to plan their morning commute with this in mind; moving out earlier to capitalise on earlier trips before the morning peak, if at all possible," added the bus company as it hinted that the dedicated lane could be reintroduced when work on the highway is completed next year.