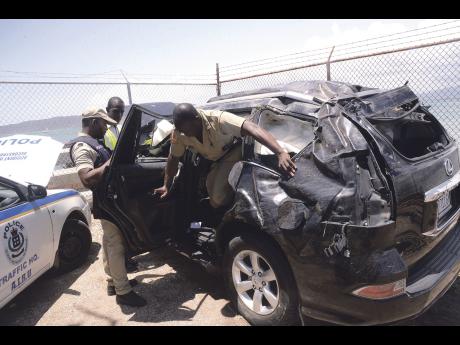 Persons who had plans to close off the Easter holiday with a seafood feast at the Port Royal-based restaurant, Gloria's, would have turned up to closed doors yesterday.

The popular restaurant did not open for business on what would have been one of the busiest nights of the holiday as family and staff were plunged into mourning following the tragic death of one of its owners in an early Easter Monday morning crash.

Cecil Prawl, 49, was travelling from Kingston into Port Royal in the wee hours of the morning when he reportedly lost control of the black Lexus sports utility vehicle (SUV) he was driving along a section of the Port Royal main road called Lightbourne Corner. The vehicle crashed and overturned several times.

Alleged eyewitnesses corroborated the police report, adding that most of the injuries Prawl sustained were to the head and upper body.

"I was down there until the ambulance from over the airport came for him. He had a lot of cuts. His head had the most injuries. It was terrible! I just could not believe, because him mash up bad," a man, said to be one of the first on the scene, told The Gleaner yesterday.

Cecil died on the birthday of his late mother, Gloria Prawl. In fact, the scene of the accident was approximately two kilometres from the Port Royal cemetery, where he, along with the rest of his family, was due to visit later in the day to pay tribute to her.

Meanwhile, at the Prawl's family house in Port Royal, Tanya Prawl was still trying to come to terms with the sudden loss of her brother and business partner.

"I got a call this morning about 5 o'clock or so and that's when I rushed down to see what was happening," Tanya, dressed in full black, said from her family home in Port Royal, where other relatives and friends had gathered.

"Right now, what I have to do is hope for the best. We could not have opened today. Trust me, with all that has happened, nobody [was in the frame of mind] to work, but we will open tomorrow," the teary-eyed sibling said with a shake of her head.

Over at the nearby police post, persons, still in shock, converged to look at the mangled SUV.

Although the police have theorised that speeding was the cause of the accident, they said investigations are ongoing.