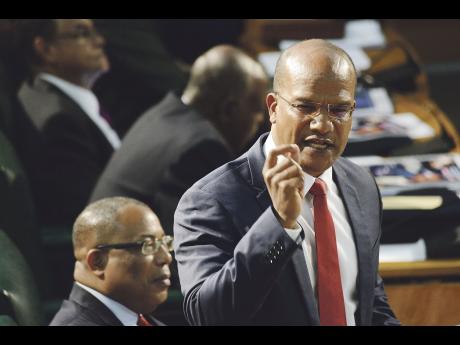 Raising questions about 'fit and proper' criteria for receiving contracts from the Government, Opposition Spokesman on National Security Peter Bunting yesterday queried whether someone who had been convicted for narcotics and related offences and deported from the United States would be in a position to be awarded a more-than-$400-million contract from the Ministry of National Security.

"Does it matter whether a director or shareholder of this company is the subject of adverse traces by local or international law enforcement, or has previously been convicted of narcotics-related offences and deported from the USA?" Bunting questioned his government counterpart Robert Montague during his contribution to the Sectoral Debate in Gordon House.

"The other question the minister needs to answer is whether the Ministry of National Security has any fit and proper criteria that they apply when issuing a huge contract for over $400 million?"

The opposition spokesman charged that the large contract to purchase motor vehicles for the force was awarded to a company, he claimed, that had not imported one vehicle in the last two years, since March 2015. "Yet the ministry has handed over $200 million to this entity as an advance or deposit," he added.

Bunting complained that despite tabling questions six weeks ago about the used-car procurement process, Montague has failed to respond, even though the answers were three weeks overdue.

According to Bunting, the police have only received 40 used vehicles for fiscal year 2016-2017, despite having a budget of more than $500 million to purchase 240 cars.

In a quick response, Montague accused Bunting of "trying to catch the headlines", noting that the opposition spokesman was using the Sectoral Debate to spread fake news.

"We had a public tender that was followed by the letter and the spirit of the law. The NCC (National Contracts Commission), as it is the process to hand over to the NCC all the documents, Ö made a recommendation which the ministry endorsed to a company," the minister added.

Montague said he was not aware if there were questions about fit and proper requirements for any person linked to the contract, because he was not involved in the procurement process.

"The integrity of the membership of the National Contracts Commission is above board," Montague declared, saying he welcomed an investigation into the award of the contract from the Office of the Contractor General.

The minister said he was not dodging questions, as suggested by Bunting, noting that the answers would be tabled in Parliament and "we are prepared to deal with the supplementary questions".