Gov't hits back at PNP over road project accusations 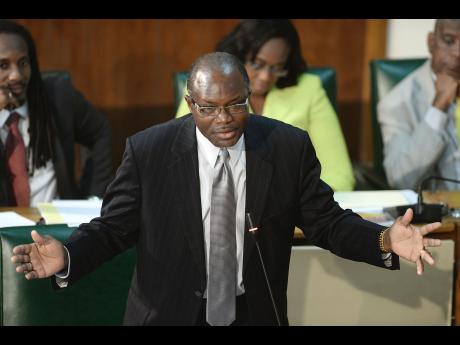 The Andrew Holness administration has hit back at the People's National Party (PNP), suggesting that it was being hypocritical in raising concerns about road works to be done in 26 constituencies.

Political Ombudsman Donna Parchment Brown is investigating claims by the PNP that "political bias and partisan politics" were involved in the determination of the $3.2 billion road-rehabilitation project. She told The Gleaner last week that she received a letter from the party's General Secretary, Julian Robinson, outlining several allegations.

In the letter, a copy of which was obtained by The Gleaner, Robinson said, "Information has come to the party that ... approximately $2.8 billion is allocated to constituencies represented by 24 members of parliament from the Jamaica Labour Party (JLP), while approximately $190 million was allocated to constituencies represented by two members of parliament from the PNP."

But Everald Warmington, state minister in the Office of the Prime Minister with responsibility for works, said yesterday that some of the roads were being completed after being abandoned by the PNP administration when it came to office in 2012, while other roads were in constituencies lost by the PNP in last year's general elections.

"So what are they saying? Given that they have lost those constituencies, we should take it from the constituencies and put it somewhere else now?" he questioned in a Gleaner interview.

Claiming that the road works project is similar to last year's $800 million debushing saga, Robinson said that the Office of the Contractor General should also look into the matter.

On March 23, the National Works Agency (NWA), which is overseeing the project, issued a release stating that a $3.2 billion road project was to start in 11 parishes. It listed 26 projects but did not give a constituency breakdown. It said that the

project was under the local component of the US$350 million Major Infrastructure Development Programme and that contracts had been signed recently between China Harbour Engineering Company and nine local companies to do the work.

E.G. Hunter, NWA chief executive officer, said that this latest project is part of a "master list" and that other areas will be covered.