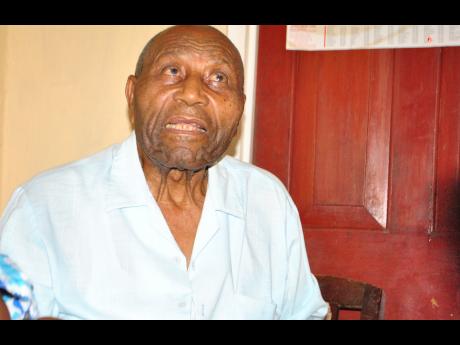 A glorious chapter in longevity came to a quiet end yesterday when 97-year-old Harland Fairweather, who was listed in the Guinness Book of Records as the world's oldest man with a living parent, died peacefully at his home in Duanvale, Trelawny.

According to relatives, the death of the elderly Fairweather, who was full of life and good humour when his mother, Violet Brown, celebrated her 117th birthday on March 10, took them by surprise. They said that except for his longstanding issues with hypertension, he had shown no signs of illness.

"Yes, he died peacefully this morning," a relative told The Gleaner yesterday. "He was not really sick, but he suffered with high blood pressure, which bothered him from time to time."

Fairweather, who was born on April 15, 1920, was the first of his mother's six children. He was considered a dutiful son as he stayed with his mother all his life.

When The Gleaner spoke to Fairweather after Governor General Sir Patrick Allen paid his mother a surprise visit on the eve of her 117th birthday, he attributed his longevity to the care he got from his mother.

"I wish that today's children had parents like my mother," Fairweather said at the time. "She is one who has respect for principles, and she grew us up that way."

Interestingly, his mother became the oldest woman in the world just days ago when the Italian woman who held the title, Emma Morano, who was also 117 years old (born on November 29, 1899) died.

With Harland Fairweather's innings coming to a close, just three years shy of becoming a centenarian, up to press time, his relatives were trying to figure out a way to pass on the news to his mother without causing her too much distress.

The 97-year-old, who was listed in the Guinness Book of Records as the world's oldest man with a living parent, yesterday died peacefully at his home in Duanvale, Trelawny.

His mother, Violet Brown, was, days ago, declared the oldest woman in the world at 117 years old.

"Aunt Violet doesn't know that he has passed, and we are now trying to figure out how to break the news to her," a relative told The Gleaner. "They were very close - much more than just mother and son ... . They really love each other."

Duanvale, which adjoins Usain Bolt's home district, Sherwood Content, is a community with numerous persons living over 90 years in reasonably good health. Like the mystery surrounding Bolt's athletic prowess, the cause of the residents' amazing longevity has sparked numerous discussions.