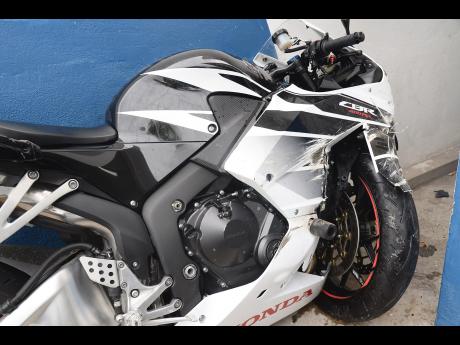 Jermaine Barnaby
The damaged Honda sport bike that Olympian Germaine Mason was driving in the fatal crash on Thursday along the Norman Manley Highway in Kingston.

With the total road fatalities numbering 103 as at Monday, data from the Police Traffic Division have shown that motorcyclists, 31, and pillion passengers, five, account for one-third of the overall figure.

This has led to renewed pleas from the National Road Safety Council (NRSC) to motorcyclists and pillion riders to wear protective head gear and clothing, as is required by law, for their own safety.

The issue of road safety was given renewed life on Thursday with the tragic death of 34-year-old Olympian Germaine Mason.

Mason had just left the 'I Love Soca' party on the Kingston waterfront, where he had been in the company of Olympic champion Usain Bolt, retired footballer Ricardo 'Bibi' Gardner, Olympian Michael Frater, and other close friends.

According to reports, at approximately 4:20 a.m., Mason was travelling along the Norman Manley Highway when he reportedly lost control of the Honda sport bike he was driving and crashed at about 100 metres south of the Harbour View roundabout.

Head of the Police Traffic Department, Senior Superintendent Calvin Allen, said Mason was not wearing a protective helmet, while Harbour View Police at the scene stated that the Olympian sustained serious head and facial injuries.

Though the total road fatalities represent a 22 per cent decline compared to the corresponding period last year, which saw 132 fatalities, data also show that the 10 fatalities recorded over the extended Easter weekend (Holy Thursday to Easter Monday) is only topped by 2008 figures, which totalled 12.

"While the statistics from the Police Traffic Division point to a worrying and dangerous trend over the Easter holidays, we all have the ability to make a positive change based on our daily choices, including taking responsibility for our safety and the safety of the most vulnerable on the road," said Executive Director of the NRSC Paula Fletcher, who expressed condolences to the family members of those who perished in the crashes.