PSC biased towards men - Novelette overlooked because of her gender, claims UWI professor 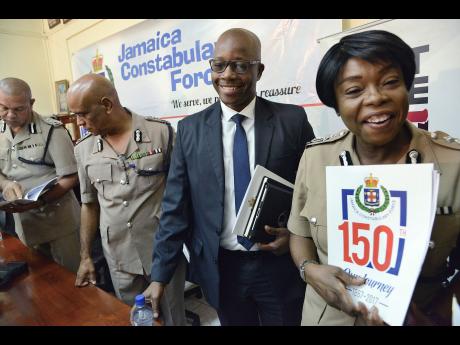 While there has been the usual lack of explanation from the PSC as to why it selected the new commissioner, Charles has sided with women's rights activist Dr Glenda Simms, who has argued that gender played a part in Grant not being selected as the next commissioner of police.

"Novelette Grant is the best of the lot, the best was not selected," Charles told The Sunday Gleaner hours after George Quallo moved into the top job in the Jamaica Constabulary Force (JCF).

"I have interacted with a lot of senior officers and I am impressed with her. What I see in her is integrity. She is smart, able to dissect the crime problems and is willing to work with various stakeholders. She is solutions oriented.

"My interaction with her suggests that she is a problem solver. She is very analytical; she knows what the problems are. What I can tell you is that when I speak to people outside and inside the universities, (people) I would consider my seniors, they say she is the best of the lot," added Charles.

The senior lecturer in political psychology at the University of the West Indies, Mona campus, said he was not in a position to speak to Quallo's ability to lead the JCF but argued that the new commissioner was never listed among the front-runners for the job.

According to Charles, the lack of excitement that greeted the announcement of Quallo as the new commissioner sends a strong signal.

"I cannot comment on his abilities because I don't know. I knew of him, but the fact that he was not considered a front-runner, I am wondering why his name wasn't buzzing around ... and the public doesn't seem to be excited about him," said Charles.

"It's not that he is incompetent. He just was never in our thoughts as one of the men. You can have someone who has no buzz, but is very competent. I am just saying that there was no buzz from where I stand about this person," added Charles, who said he was impressed with the performance of Grant during the period she acted as commissioner.

Charles argued that Grant embarked on a tireless community-policing campaign during her three-month stint in the JCF's top job, and he is convinced that this is needed.

"Community policing and respect for the rights of citizens, and just approaching people respectfully, instead of 'hey boy, come yah' could make the difference," said Charles.

He argued that Grant was overlooked because of the patriarchal nature of the Jamaican society.

"Hear mi now, the reason why we never had a woman (police commissioner) before is because of patriarchy. Men nuh really respect women that way to support them. Nothing is wrong with the women.

"The women are equally competent and in some instances will do well, more than what men will do. It's just that patriarchy, the rule of men ... is what prevents the women," said Charles.

A similar sentiment was expressed by Simms in the immediate aftermath of the announcement of the new commissioner.

"I don't care what they say. I think gender played a part in it," said Simms, as she argued that it is time for Jamaica to start breaking the patriarchal barriers which diminish the role of women in the Jamaican society.

"The values of patriarchy are alive and unwell," charged Simms.

Suicidal gangsters - Criminals courting death, too coward to kill themselves
Deadly police rage - Members of the security forces who kill their women find them too spunky
FEBRUARY 11- 4 …14 days of hell for the PNP
A victory for democracy - Andrew beats the data as JLP catches PNP flat-footed
FORECAST: PNP WIN! - Portia set to remain PM after election, University team projects 40 seats for the PNP