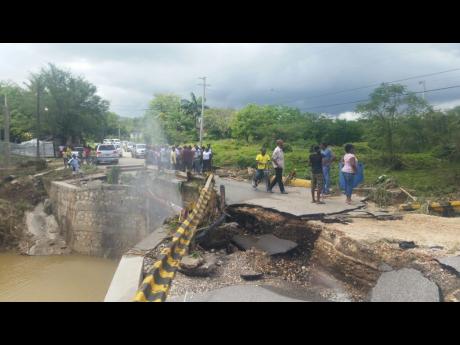 Contributed
A damaged bridge in the vicinity of Jacob's Hut to Pleasant Valley near Denbigh in Clarendon. The heavy rains caused flooding, which, in tirn, caused structural damage to the bridge.

The National Works Agency (NWA) has advised that the bridge in the vicinity of Jacob's Hut to Pleasant Valley near Denbigh in Clarendon has been closed.

Anthony Hughes, parish manager of the NWA, says that the structure of the bridge has been compromised because of the force of the floodwaters.

Two National Water Commission mains that run beneath the bridge have been broken.

To ensure the safety of the residents and motorists, the NWA says that vehicles are not allowed to cross the bridge, but pedestrians may use it. An alternative route is to be announced by the NWA.

A technical services team will be deployed to the area tomorrow to assess the extent of the damage.

"So far, we see the need for intervention insofar as the drainage system is concerned. The systems could not handle the volume of water that passed through here Saturday, and we are looking to see what mitigation measures we could employ," NWA's Communications Manager Stephen Shaw said yesterday following a tour of the Nineteen Miles and Palmetto Pen areas in the parish.

"We have mobilised the crews and instructions have been given to the parish team to have all the areas dealt with in all areas across the island where we have had impact," Shaw added.

Member of Parliament for Central Clarendon Mike Henry expressed the view that the extensive damage to the bridge was the result of the major road rehabilitation work that has been taking place on the main road from Source Sop Turn to Chapelton.