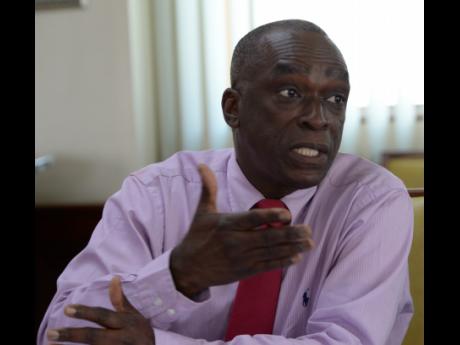 Anthropologist Dr Herbert Gayle has been studying child killers for the past 22 years. "I am probably the only person in the Western Hemisphere who has studied 200 of them," he declared to a stunned Fourth Floor panel.

"When you ask them about their first kill, a lot of them were either suspended at the time or kicked out of school for behavioural problems. That, to me, says a lot about the responsibility of the Ministry of Education."

In support of the dropout phenomenon, consultant psychiatrist Professor Wendel Abel referred to an Inter-American Development Bank study, which found that the victims and perpetrators of crime and violence were mainly males, the majority of whom did not complete their high-school education.

The question put to the panel was, 'Is a child doomed when he is kicked out of school?' Not necessarily, says the evidence placed before the participants by Dr Gayle. It says that children can be rehabilitated and be made to turn their lives around.

As a co-founder of the Spanish Town-based non-governmental organisation (NGO) Children First, Dr Gayle has seen these children. "We have testimony more than anybody else that these kids' lives are not over. We take them from nowhere - from the streets - [and being] potential killers to valedictorians of top universities around the world."

So what is the formula that this struggling NGO uses to achieve such spectacular results with children who are discarded to the dung heap? "At Children First, we put them on the board. Unlike the way they are treated in Jamaica, at Children First, they have immense power," stressed Gayle.

"Nature abhors a vacuum," declared Abel. He argued that the State has not put adequate systems in place to support organisations like Children First and similar NGOs, which are teetering on the brink of extinction because of lack of funds.

Gayle wants to see an effort made to keep boys in school. During interaction with men who walk on the wild side, Gayle says that many of them would readily swap their guns for a laptop and a place at an institution of learning.