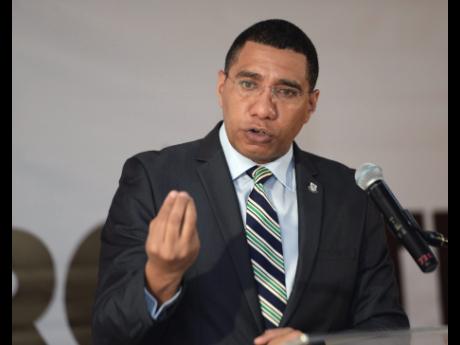 Prime Minister Andrew Holness has said that the flooding across sections of Jamaica was attributable to the country's lack of capacity to deal with extraordinary weather events.

"As a country, our development has not kept pace with our ability to deal

with runoff, solid-waste management, and other environmental issues. Added to that, past administrations have not managed the development process effectively to ensure that the increased capacity of the drainage systems matches the level of physical development," declared Holness in a news release yesterday. "We now must develop a programme to expand and manage the country's infrastructure to deal with such extraordinary weather events," the prime minister said.

Following the heavy rainfall, there were reports of residents being stranded as communities were cut off by landslides in the parishes of Clarendon, Portland, and St Thomas. This triggered a blame game between representatives of the governing Jamaica Labour Party (JLP) and the opposition People's National Party (PNP).

Minister of Transport and Mining, Mike Henry, in response to the devastation in Clarendon, including the capital, May Pen, attributed this to "systematic derailment of a solution to the long-time drainage problem that has affected the town of May Pen, by the PNP administrations, dating back to the late 1970s.

Patricia Duncan-Sutherland, the PNP's caretaker for South East Clarendon, used a similar medium to cast blame for the damage caused to buildings, vehicles, and other property by floodwaters on the JLP.

"It is unfortunate that we must suffer this kind of devastation after an alleged $70 million has been spent on drain cleaning in the constituency. The people of Clarendon deserve better and should demand better," she said.