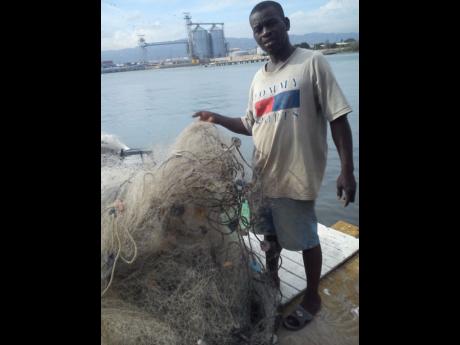 "Not close to satisfactory" are the words Novlette Mighty, president of Greenwich Town Fishing Group, used to describe the payment package being offered by Kingston Freeport Terminal Limited (KFTL) to compensate fisherfolk for the hindrances caused by the dredging process being carried out in their area.

In a bid to compete with other ports regionally, KFTL earmarked a sizable US$150 million in January to increase the maximum boat size able to access Port Bustamante by way of deepening the channel and bay through the exercise.

While commending KFTL for its initiative to open the lines of communication with those to be most affected by the dredging, Mighty stated that the claims were not up to date and were meagre at best.

"A fisherfolk put in a claim for over $200,000 for missing out on seven days' work as a result of the dredging, and he got a mere $3,000. We appreciate the move on their part but they're not meeting us anywhere close," said Mighty, whose Greenwich Town Fishing Village comprises more than 100 fishermen and 300-plus fish vendors.

Claims are submitted by filling out a detailed form titled 'Application for livelihood support' which requests information such as: fishing licence; boat details; the number of times a week they fish; regular fishing ground(s); amount normally caught per day.

Individual Scotia QuickPay accounts are set up for fisherfolk by KFTL to access payments.

In adding that proper procedure is followed in completing the claims forms, Mighty also stated that her group was in need of a simpler breakdown of the payment formula utilised by KFTL.

"We've submitted the data along with pictures to show what our folks have been encountering because of the dredger, but the claim process is very technical."

Damage to the nursery habitat was also a concern voiced by the president.

"We're catching a lot of dead fishes as a result of the dredger. This beach supplies all of Jamaica with herring sprat and the dredging process is seriously hampering us."

The dredging, which targets depths between 18.5m for the access channel and 15.85m for the port, is scheduled for completion by July.