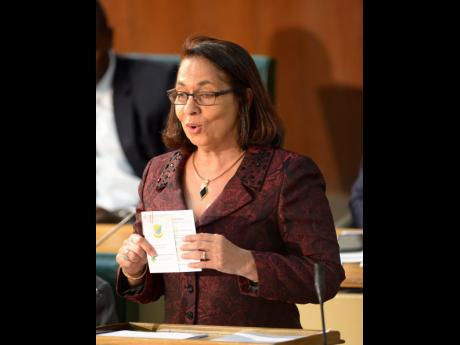 The police are to "swiftly" probe reports that criminals are scamming elderly Jamaicans out of their National Insurance Scheme (NIS) benefits - often, their only source of income - the Caribbean Community of Retired Persons (CCRP) has said.

Labour and Social Security Minister Shahine Robinson, yesterday, told lawmakers that she was "shocked" at the reports.

"These persons are pretending to be employees of the NIS and have been approaching pensioners, allegedly claiming that their pension rates are to be doubled and requesting that pensioners hand over their Pension Order Books," she said while making her contribution to the 2017-2018 Sectoral Debate.

But Robinson said that the ministry did not recall books when it was increasing rates and, therefore, pensioners asked to do so "are not to hand over their books. Report these suspicions to the police," she added. "We must respect and protect our pensioners, especially in these economically challenging times."

Jean Lowrie-Chin, the founder and president of the CCRP, is urging the police to investigate the allegations "swiftly and deeply" so that the behaviour can be "stamped out".

Additionally, she said that relatives of the elderly have to be more vigilant. "Our elderly are so vulnerable, and we are certainly going to be putting out press releases and notices to the general public. We want to call on the relatives of these elderly folks to guide them and look out for them."

Lowrie-Chin said that church groups and other community organisations should help in the public education campaign. "They (pensioners) will need protection from these scammers."

Robinson told Parliament yesterday that phase one of the reforming of the NIS had started and pointed to legislation mandating actuarial reviews every three years. Further reforms include the revision of application forms and the introduction of a new NIS card, set to be rolled out on June 1.