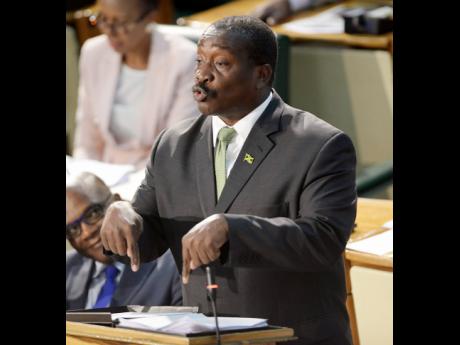 "As a nation, we must take back control of our public spaces," he told the House of Representatives yesterday during his contribution to the 2017-2018 Sectoral Debate. "Illegal vending, squatting, the do-as-I-please mentality must all be curbed so that public spaces can be enjoyed by all."

He said that that is why the Jamaica Constabulary Force launched Operation Clean Sweep, which "is bringing back some semblance of order".

Corruption, the security minister, said, is the greatest threat to national development. "If we are to build a safe and prosperous Jamaica, all Jamaicans must be committed to tackling corruption."

Jamaica slipped 14 places to 83 out of 176 countries on the 2016 Corruption Perceptions Index (CPI) ranking released in January by Transparency International. Jamaica recorded a score of 39 out of 100, two points lower than the 41 attained in 2015.

On the CPI, zero is seen as highly corrupt and 100 as very clean. Jamaica has averaged in the 30s, and countries scoring less than 50 are said to have "a serious corruption problem".

Montague said that the situation has to change and pointed to reform efforts.

The Integrity Commission bill - legislation to create a single anti-corruption authority with prosecutorial powers - was approved by the House in January but is yet to be debated in the Senate. Former Contractor General Greg Christie has criticised it, saying that it is "weak".

Meanwhile, the security minister noted that territorial integrity, terrorism, the protection of critical infrastructure, and the continuation of government were other elements that required attention.

Regarding the latter, Montague questioned yesterday, "how we could, as a nation, survive" if at a major gathering such as the opening of Parliament, a catastrophic event resulted in the loss of heads of state bodies and institutions. He said that a backup plan to ensure the continuity of government was being worked on.

The additional basic elements to ensure Jamaica's security that Montague listed are cybercrimes, education, protection of the economy, and crime and violence.

He tabled the Five-Pillar National Crime Strategy in the House, which Governor General Sir Patrick Allen announced at the opening of Parliament in February to mark the start of the 2017-2018 legislative year.