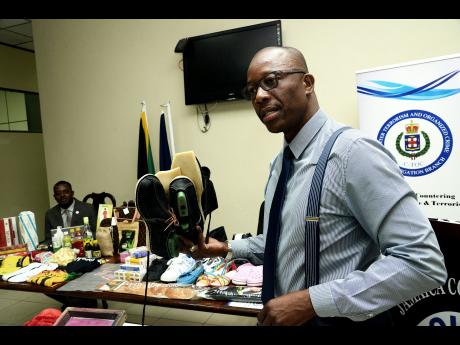 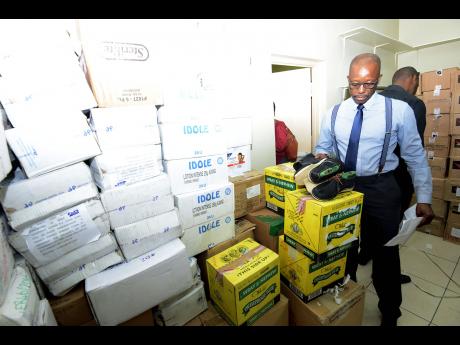 Norman Grindley
Fake rum which Assistant Commissioner of Police Clifford Chambers is displaying here, is among the items seized by the police. 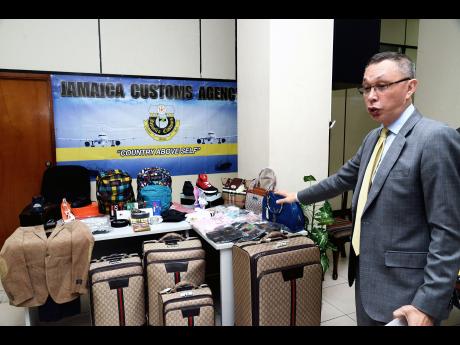 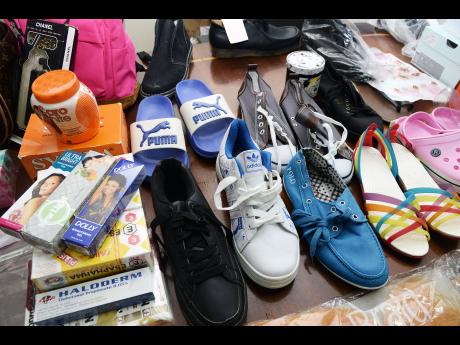 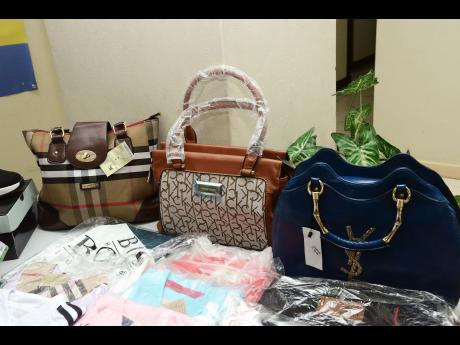 Rum is among the latest items being counterfeited by criminals in Jamaica. The bulk of the $1.9 billion worth of fake goods seized by the Counter-Terrorism and Organised Crime (C-TOC) Branch last year is being linked to criminals.

The seized items were put on display by the C-TOC's top security officers during a special press conference in downtown Kingston, yesterday. They included boxes of handbags, shoes, skin-bleaching products, T-shirts, computers and other appliances, clothing, and CDs and DVDs.

They were confiscated from a makeshift distillery operated by organised thugs who were allegedly using other ingredients to turn the deadly chemicals into alcoholic beverages for consumption that smell, taste, and are even of a texture similar to some locally made products.

"What they are doing is taking alcohol that is intended for the clean-up market, meaning, to clean tiles ... and they are using a creative process that they have found on the Internet to move it from what it is into a form that is capable of allowing you to drink it and get the same vibes as you would if it were true alcohol," said Berry.

"If you consume this for any length of time, then it starts damaging organs. It could lead to blindness, your organs could collapse, and you could even die as a result," said Berry. "So we are urging people to be wary of purchasing alcohol that may look and smell like rum but in fact is not rum."

WORKING WITH THE POLICE

Berry said that the island's leading rum producer, J. Wray & Nephew Ltd, was aware of the racket and was working with the police to make its rum less susceptible to counterfeit.

Berry is urging other alcohol outlets to increase their partnerships with the police, indicating, however, that the criminals appeared to have a niche market. In the interim, he advised that consumers pay attention to the alcoholic beverages they purchase, especially those sold in suspicious-looking plastic containers.

Berry said that persons have been arrested in connection with the find and that the makeshift distillery has been destroyed.

He declined to say, however, where it had been located or from where the criminals could have been getting the hazardous chemical.

Yesterday's press conference marked the observation of Intellectual Property Week and the annual destruction of items confiscated by the C-TOC. The items were taken by trucks to their final destination, reportedly, in Kingston.

This followed a seizure two days ago in which counterfeit sneakers, valued at $20.5 million, were confiscated during a single raid in Montego Bay, St James.

Head of the C-TOC, Assistant Police Commissioner Clifford Chambers, said that proceeds from the sale of these items were being used to purchase illegal guns and ammunition.

"The enforcement of intellectual property rights has become more dangerous in recent times because there is now a direct link and association with organised crime," said Chambers.

"We are seeing the networks using the same safe houses, the same routes, the same gang members, and the same communities moving around these goods, and we have arrested persons. You can understand clearly the link between guns, ammunition, and the current environment with regard to counterfeit items," said Chambers.