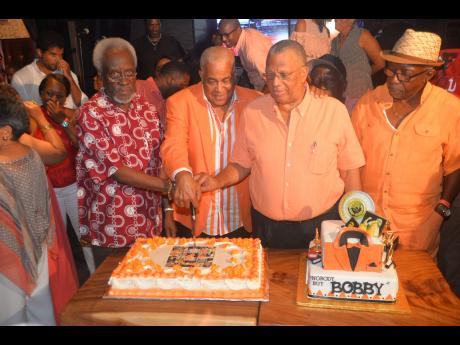 Robert Pickersgill, chairman of the People's National Party (PNP) and member of parliament for St Catherine North Western, was lauded for his 25 years service as the party's chairman at a colourful function put on by the party's Region Six in Montego Bay on Sunday.

The former minister of water, land, environment and climate change was overwhelmed by a sea of thanks from his fellow party officers as well as family and friends, who all seemed quite eager to express their gratitude to the so-called 'Chairman For Life' at the special event, which was held at Hard Rock CafÈ in Freeport, Montego Bay.

Former Prime Minister P.J. Patterson, who himself is also a former party chairman, noted that Pickersgill was the longest-serving chairman of the PNP, behind the party's founder, National Hero Norman Manley.

In showering praise on Pickersgill, Patterson noted that his longevity as chairman of the PNP would not have been possible had it not been for the camaraderie on which the PNP was founded. He also used the opportunity to call for more togetherness going forward.

"All of us who rose to positions were out there with the people. We developed a team of friends and we worked together as brothers and sisters," said Patterson. "So we need more of these things that bring us together in celebration, because when you do that, then the rivalry, hostility, animosity and the bad talking will stop, for all of us are in the same space."

Newly installed party president, Dr Peter Phillips, said that it was unlikely that any future chairman will reach Pickersgill's enviable milestone as his overall stewardship in the party goes back 50 years.

"Bobby exemplifies commitment to the party and we have been fortunate over the years to have somebody like him," Phillips said.

In responding to the rich accolades of his colleagues, friends and family, Pickersgill stated that the PNP has played a critical role in his personal development from his school days until now and vowed to continue to play an integral role in "this great movement because I am indeed thankful ... . I certainly did not achieve this milestone on my own".