'Give pensioners interim dividend of $1,000 a month' 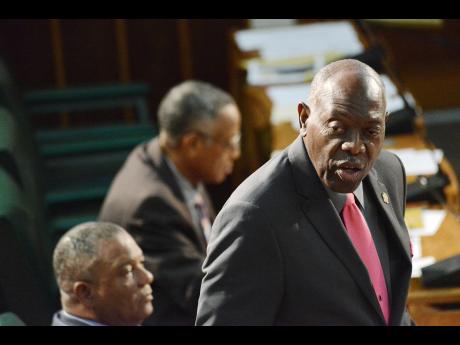 With the National Insurance Fund (NIF) having pulled in $14 billion in investment income last year, Opposition Spokesman on Labour and Social Security Dr Fenton Ferguson is urging the Government to provide pensioners with an interim $1,000 increase per month, noting that this vulnerable group did not benefit from the administration's tax give-back.

"If the Government should consider giving each of the 110,000 pensioners an interim dividend of an additional $1,000 per month, this would work out to $12,000 per pensioner for the year and an overall total of $1.3 billion," Ferguson suggested, during his contribution yesterday to the Sectoral Debate in the Lower House of Parliament.

The opposition spokesman contended that in the private sector, no company could earn such a significant profit and not consider an interim dividend to its shareholders. "The pensioners are the true shareholders of the NIF," Ferguson said, adding that the fund made money on their investment.

In her contribution to the Sectoral Debate, Labour and Social Security Minister Shahine Robinson acknowledged that an increase in the rate of pension was overdue. However, she noted that the Government was unable to grant an increase at this time, as it awaits recommendations from actuaries about adjustments to the contribution rate that would enable future increases.

Insisting that the Government should grant an increase to pensioners, Ferguson charged that these persons were facing higher prices owing to the effects of inflation. He said without an increase in pension benefits, pensioners would slide deeper into poverty.

At the same time, Ferguson urged the Government to make good on its campaign promise to double the minimum wage. "The promised doubling would be welcomed by this cohort of workers in light of the almost $30-billion tax package they now face."