Tourism earnings hit US$1 billion jackpot over past four months 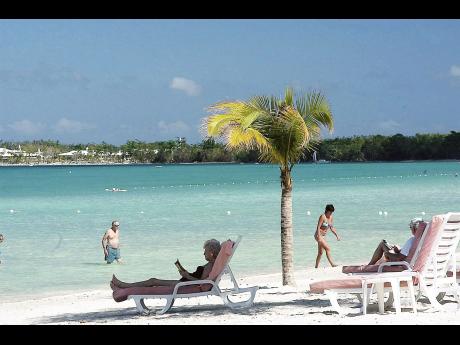 Jamaica's tourism earnings have hit the jackpot, raking in a record US$1 billion over the past four months, says tourism minister Edmund Bartlett.

"We have never had a winter season like this before, certainly not US$1 billion in earnings," Bartlett said, days after the 2016-2017 winter tourist season ended. The US$1 billion is a 6.5 per cent increase over the same period last year.

The minister, who returned from a two-week visit to both Africa and Asia where he had a number of speaking engagements, added that he was not the least bit surprised by the numbers, noting that "this is what one would expect from having a first-rate tourism product like ours".

He said what makes it even more remarkable was that there was a relatively soft period in both February and March, which normally happened after an election in the United States, the country's biggest source market.

Bartlett further said that if there were uncertainties before, they did not show in the preceding months, particularly in April where "things just took off".

"We had a total of 1,579,273 visitors between January and April overall," he pointed out, "795,193 were from stopover arrivals, while 784,080 were from cruise shipping." He added: "The fact that the cruise shipping total is so close to stopover visitors should tell the kind of year we have had so far in cruise tourism - it has been nothing short of phenomenal."

Bartlett further stated that the combined 13.6 per cent increase in both cruise shipping and stopover earnings when compared to the corresponding (January-April) period last year was nothing to scoff at, adding that this is something that the ministry expected to build on.

'We won't be complacent'

"In every single area in both arrivals and earnings, for both cruise shipping and stopover, there has been an increase, right across the board," the tourism minister declared.

"We, however, are not going to sit on our laurels and be complacent. We have commitments from the two biggest cruise companies - Royal Caribbean and Carnival - that we will continue to get their flagship vessels, positioning us as one of the true first-call destinations."

Bartlett said he was also comfortable with the fact that key stakeholders have been buying into the vision, pointing to significant investments being made by Appleton, Chukka and other entities in building and upgrading attractions.

"We also have a significant amount of hotel rooms coming on stream in both the Trelawny and St Ann areas, and we are also starting to make inroads in both the Asian and African markets.