Process used to give Chinese lands under question 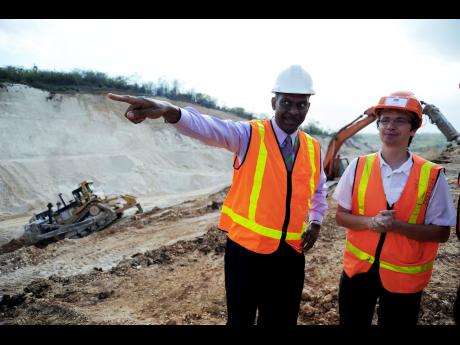 Most of the 1,200 acres of prime lands that the Jamaican Government has already provided to the Chinese developers of the North-South Highway was not valuated, and that is "untidy", a lawmaker has told the state agency representing the Government's interest.

China Harbour Engineering Company, through its company Jamaica North South, in 2012, entered a 50-year concession agreement with Jamaica that saw the development of the 66 kilometres roadway spanning Caymanas in St Catherine to Ocho Rios in St Ann. It was fully opened last year.

The project cost more than US$720 million and under the agreement, saw the Chinese meeting the full financial cost, with Jamaica, instead of cash, providing more than 1,200 acres land for development under strict conditions.

Responding to queries from Government Member of Parliament Leslie Campbell, Anderson revealed that no valuation was done because the lands being provided were state-owned.

Of the 1,200 acres, approximately 850 acres have already been identified. That includes 200 acres at Mammee Bay and 650 acres at Caymanas. A hotel for the Mammee Bay property and an industrial complex at Caymanas have been proposed for the properties.

Land could have been sold for significantly more

Government Member of Parliament Leslie Campbell is suggesting that Jamaica may have agreed to provide lands to Chinese developers that would otherwise have attracted a significant cost if they were being sold. "I somehow get the impression that this is a little untidy arrangement. Some arrangements ought to have been put in place to factor in these very expensive lands," he said.

"We're trying to understand how that selection has taken place, and again, what value is put on it. The value of the asset that we're giving up, there has to be some reckoning of it. It was not spelt out in the original agreement," the Public Administration and Appropriations Committee chairman, Dr Wykeham McNeill, said, noting his concerns.

Ivan Anderson, head of the National Road Operating and Constructing Company, insisted that a criterion was used to select the lands, which, he said, offered "far greater" benefits to the economy than if Jamaica had helped to cover the project financially. "The developer will come, and he'll say, 'I want to develop property A'. But on property A, he now needs to outline a plan for the development and how quickly he will do the development."

The remaining 350 acres have not been finalised, though eyes are on Golden Grove in St Thomas.