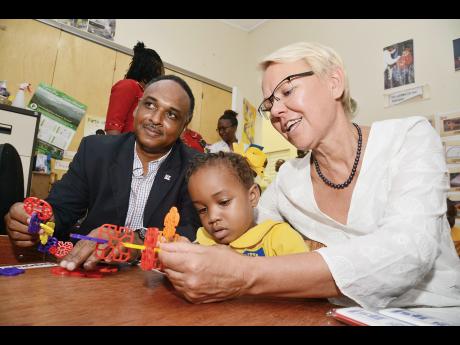 Rudolph Brown
Head of the European Union Delegation in Jamaica Ambassador Malgorzata Wasilewska (right) and JSIF Managing Director Omar Sweeney interact with one of the students at the Jones Town Church of God Basic School yesterday.

Three schools yesterday highlighted what they deemed significant improvements in the teaching and learning environment, thanks to the more than $90 million worth of investments provided mainly through the European Union (EU).

Ambassador Malgorzata Wasilewska, head of the EU Delegation in Jamaica, who toured the schools yesterday, emphasised that creating an enabling environment for learning was important to poverty reduction - the area under which the projects fell.

"It's the first time I've had the chance to come to these communities and see for myself the schools, the fantastic quality of teaching that the teachers can provide, the safe environment, the colourful spaces and designated spaces for children," Wasilewska said.

"One of the schools that we went to, the teacher told us they no longer have to remove everything on a Friday evening. It's a wonderful investment in the children of Jamaica, particularly in these poor communities."

The Jamaica Social Investment Fund was the implementing agency, and its managing director, Omar Sweeney, said that the projects have had "tremendous effect in charting the trajectory of the children through the system".

"At Constant Spring Primary, 85 per cent of the students there now are receiving the schools of their choice for secondary [eduction]. At Regent Street, they had close to 60 children in one classroom. Now, we've been able to have the right ratios in terms of 15 to 20 in one classroom."

The improvements, according to Jones Town principal Sonia Henry DaCosta, have been important in ensuring that proper education can take place.

WHAT THE SCHOOLS GET

- Constant Spring: construc-tion and equipping of four classrooms; perimeter fence for 1,130 students at a cost of $28 million.