End of May new deadline for Marcus Garvey Drive reopening 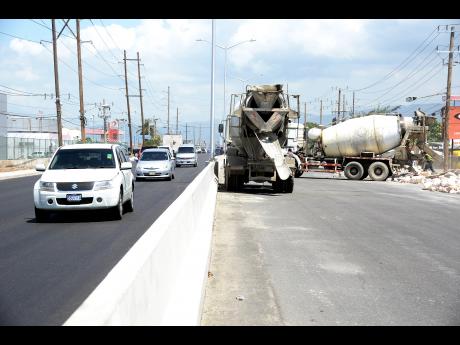 Norman Grindley
Work in progress on Marcus Garvey Drive yesterday to create a six-lane road way. The work was slated to be completed at the end of April.

Insisting that the road work has not slowed down, communications manager at the National Works Agency Stephen Shaw, despite not being able to pinpoint the definite cause of the delays, explained yesterday that there were some issues with the project.

"The work has not slowed down. It is coming to completion, so you won't find the number of activities that would have been undertaken six months ago to be done now.

"Where we are is simple. The contract that we have with the Chinese would have ended at the end of April, but at the end of April, there were a few outstanding things to be done, and we have the contractors dealing with those outstanding issues. We expect that in another 27 days (May 31), the contractor should have completed those outstanding items and the road would be fully reopened, meaning markings, would have been done and all the features up and working," Shaw told The Gleaner.

He was adamant that as far as he knew, there would be no extra costs as a result of the extension.

"I don't know that there are any extra costs!"