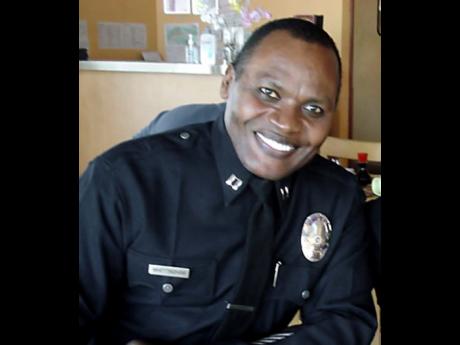 A Jamaican, who heads the Criminal Gang Homicide Division in the Los Angeles Police Department, has described the last October incident which left alleged Jamaican gang leader Robert 'Radigan' Davis dead in the American city as the bloodiest gang shooting he has ever seen.

Peter Whittingham, who spent almost 10 years in the Jamaica Constabulary Force before migrating to the United States in 1983, where he is enjoying a successful career in law enforcement, says the shooting reinforced the feeling of many persons that Jamaicans are vicious.

"That incident was the single most violent homicide seen in years," he told The Sunday Gleaner.

Four persons were killed and 11 others were left nursing injuries following a reported clash of gangsters in a makeshift Jamaican restaurant in the West Adams District, Los Angeles.

According to Whittingham, who is leading the probe, investigators are confident that the killers will be nabbed. He said one man was arrested and charged in connection with the shooting after his identity was placed on the Federal Bureau of Investigation watch list.

Now the police are hunting several other suspects and Whittingham said investigators are not ruling out that they may be hiding out in Jamaica. "It won't be long before we will have the other persons. This is a case that I'm paying close attention to," said Whittingham, who is from Canterbury in Montego Bay, St James.

"I will not discuss where exactly we think they (suspects) are at this point but we believe they may well be in Jamaica, Miami or New York. I can say it won't be long before they are in our custody. I can tell you that."

He noted that criminal acts in the US create a lasting and damaging impression of Jamaicans in people's minds, and many residents of Los Angeles have not moved past the deadly Rimpau Street incident which left the former dance hall 'big spender' Radigan dead.

The shoot-out reportedly started when two Jamaican gangs, believed to have organised criminal networks on the island, squared off at a party.

Whittingham said he is saddened by the negative impressions people have about Jamaicans overseas and this made him decide to take on the case personally.

"I became personally involved in that because that was not just a black-eye for Jamaica, it goes to the root of how people see us. That incident validated the viciousness by which people see Jamaicans, when it is really not so," he told our news team.

According to Whittingham, although Jamaicans now operating in the US are not as active as the 'Shower Posse' in the 1970s, they, along with factions from Belize, continue to be trouble groups for the cops. These gangsters are mainly involved in marijuana and cocaine smuggling.

Whittingham, who was once a ward at the Alpha Boys' School in Kingston, is urging Jamaican youths to avoid crime, particularly transnational organised crime.

"There is hope, you just have to redirect your lives to things that are positive and to let things regarding your character, credibility, integrity be the foundation of your lives. Everything will build upon that," said Whittingham, as he pointed to several Jamaica-born security officials within his circle in the US.