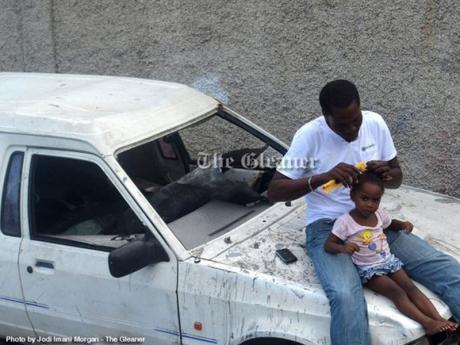 In this 2015 photo, a little girl relaxes as her father combs her hair in Campbell Town, downtown Kingston.

Having fathers play more active roles within families may be the solution to the problem of child abuse in Jamaica, says Pastor Eric Nathan, president of the East Jamaica Conference of Seventh-day Adventists.

Nathan delivered reflections on child abuse in Jamaica before scores who turned out for a Child Month church service at the Secret Gardens monument in downtown Kingston yesterday.

The service was held in memory of children who have died under tragic circumstances.

"When the family is together, and where there are fathers able to impart good values to their children, that could immediately change the landscape of abuse of our children. (It) is good when we empower fathers and encourage them to stand up and be counted as a leader in society," Nathan said.

He said he was convinced, based on research, that children generally turn out much better when they are raised with both parents.

"It is interesting, and research shows that even in high-crime neighbourhoods, 90 per cent of the children from stable, two-parent homes - where father is involved - do not become delinquent. It is interesting that when children have good father figures, their self-esteem is enhanced. It would seem as if the children who become easy prey to predators are the ones with low self-esteem, the ones that walk behind and feel insecure and not involved in the group," he said.